For Poet’s Society, ridden by Frankie Dettori, had provided Mark Johnston with the 4,194th victory of his training career. And the achievement was unmatched in the history of racing.

Johnston, clearly revelling in his grumpy reputation, told the media: “It’s a relief to get it out of the way and on to the next one. I’ve been wishing we could switch it all off and pretend it never happened. Sometimes I think: ‘how important is it?’

Then the image slipped: “At the same time, I do have to pinch myself and ask how I could get to 4,194 from where we started. It’s unimaginable.”

“Where we started” was in a modest home on the outskirts of Glasgow. His father, a reluctant soldier, worked in the Army stables as a groom. In later years, Johnston Snr was able to set up a business of his own and, when he eventually sold it, he started to fund his hobby of owning racehorses. And so young Mark entered the world he was to make his own. 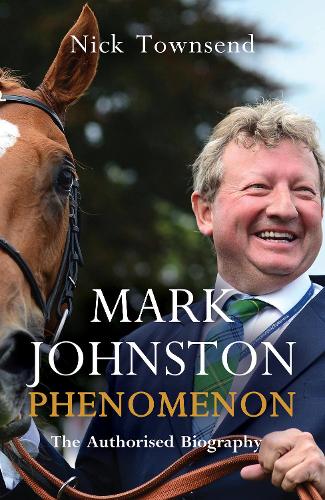 One persistent theme of Nick Townsend’s outstanding biography is the part which a shrewd head for business has played in Johnston’s career.

Every deal, be it in horses bought, stables acquired, or jockeys employed, seems to have been conducted on stark business principles. He may well have a quixotic streak; if so, it is well hidden. Where hard cash is concerned, he comes across as a realist.

An even more persistent theme is the influence of Deirdre, his wife of 36 years. Now, racing’s attitude to women can occasionally seem a touch immature. Johnston tells the story of Willie Carson meeting the wife of Johnston’s first winning owner in the paddock at Haydock.

“Now you have to remember that the owner, Brian (Palmer), and his wife, Val, knew nothing about racing. Val, just making conversation really, said chattily to Willie (five feet tall and riding at 7st 10lbs) ‘So, what do you actually weigh, Willie?’

“Willie looked her up and down before replying ‘A lot less than you, love.’” Johnston reflects, charitably: “That was our introduction to Willie Carson, a great rider who … could be a difficult personality to work with.”

Deirdre Johnston, one imagines, might have been rather less forgiving of such rudeness. A talented student, a teacher, and a woman of independent opinions, she met Mark when she was 14 and he was 17. They married eight years later, when he had qualified as a vet and was struggling to find his first racing yard, and her counsel and support has proved crucial to his subsequent success.

And such a success! His notable victories include the 1,000 and 2,000 Guineas, four Ascot Gold Cups, the Irish 1,000 Guineas and St Leger and major races in France, Italy and Germany. It has been a quite extraordinary career.

Townsend, who picks a sure-footed route through the internal politics of racing, portrays his subject as a man of robust opinions and rebellious tendencies. And yet his revealing portrait allows us to form our own view of his subject and his sport.

To those of us on the outside, racing can sometimes seem a curiously feudal pastime. At the top, we see the owners; blue-blooded or well-connected, frequently both. Over the years, they have reluctantly made space for new money; in some cases, unimaginable sums of it. A fresh aristocracy has been created.

At the other end – way, way down – we find the stable staff, the poor bloody infantry of the racing industry.

Almost 20 years ago, the Racing Post writer David Ashforth opened a “Fair Deal For Stable Staff’ campaign. He cited “issues to do with pay, including overtime pay; with hours, particularly a lack of time off; with facilities and treatment at racecourses; and with a common perception that they and their skills are not sufficiently respected or considered.”

According to Townsend, when Johnston read the article, he “hurled his breakfast tray on the floor as he leaped from the covers.”

He then resigned his column in the Racing Post with a final piece which declared: “This campaign is very bad for racing. It is bad for all of us: trainers, owners, stable staff and maybe, ultimately, racing journalists.” And he asked: “What message is it sending to potential investors?” As if that were the only important consideration.

I suspect that extraordinary outburst said rather more about Mark Johnston than it did about either Ashforth or the Post. But it also emphasised the reality that a racehorse trainer treads a precarious path between business and sport.

With his ferocious work ethic, his tried and thoroughly tested method, and his unwavering faith in his own abilities, Mark Johnston has trodden that path more surely than most.

Townsend has called his biography “Phenomenon”. The word is well chosen.