Former PA chief sports writer and Express columnist Frank Malley has hit the bookshelves with his first novel – and he admits it is aimed at a different demographic than his previous career.

“The publishers recommend it especially for women over 35, although the early reviews suggest men are enjoying it too,” says Malley of ‘When The Mist Clears’. “I always hoped it would have pretty broad appeal.”

The book draws on Malley’s experience as a volunteer driver taking cancer patients for treatment, but as much as it’s a story about the human spirit coping with the disease, it’s a story of friendship, love, battlefield trauma and a journalist at the heart of it. It has great characters and a lot of humour. 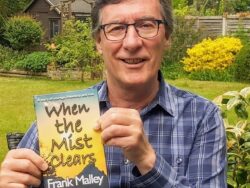 Malley says: “The book is an easy read, I think. It has strong women characters but the protagonist is a former male war correspondent suffering from post traumatic stress disorder. It has a prescient ring to it following the BBC’s Africa correspondent Fergal Keane stepping down earlier this year after revealing he had PTSD. The book is inspired by real people and genuine emotions and many of the events and conversations are 90 per cent fact.”

Malley is donating all his royalties to the Primrose Car Service (part of the Bedford Hospital Charity and Friends) which transports cancer patients from Bedford to Addenbrookes Hospital in Cambridge and he admits: “The book is a tribute to some of the inspiring characters who, despite their fears, invariably make the car journeys funny, irreverent and life affirming.”

Malley, whose previous books have been on his life as a sports journalist, Wigan rugby league and Manchester United, adds: “I have covered Olympics, world cup finals, and been all round the world reporting on sport. But this current driving job takes some beating.”

The book does give a nod to his past sometimes – old Express sweats will recognise one or two references and characters from Ancoats and Fleet Street!

When The Mist Clears, Whisper Publishing, is available via Amazon in paperback and ebook.
Sponsor