Rambling around former favourite cricket venues turned out to be a depressing journey for Michael Henderson who recounts his trip in a new book reviewed by ERIC BROWN.

Michael Henderson ignored ancient advice about never looking back and set out to revisit some of the county cricket landmarks etched on his memory since youth.

What he discovered left a dismal impression of decline and unimpressive attempts to modernise all faithfully recorded in his book That Will Be England Gone. 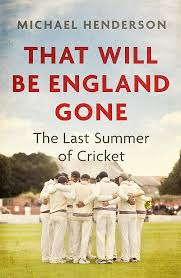 His part-autobiographical, part-travelogue narrative, written before coronavirus struck, mourns county cricket’s marginalisation to the early and late summer months while peak weeks are scheduled for whizzbang limited over competitions designed only, he says, to relieve non-cricket followers of hard earned cash desperately required by struggling counties.

This season was the one where cricket should have cashed in on England’s World Cup triumph by wooing a younger audience with the controversial Hundred competition. But the pandemic has meant grounds lying idle, The Hundred launch being delayed a year and county cricket suspended at least into July.

Henderson pours scorn on the Hundred with its anonymous team names and rules and stunts introduced to reward beer-swillers who rarely observe the action.

For anyone who recalls post-war, jam-packed grounds when county cricket ruled supreme Henderson uncovered a tale of woe even before coronavirus wrecked the season.

Lancastrian Henderson cannot summon much enthusiasm for the rebuilt Old Trafford with its hotel and new spectator facilities apparently ruining atmosphere he sampled there as a schoolboy.

A return trip to Lord’s left Henderson lamenting the loss of its welcoming Tavern landmark.

Henderson hurtles like an express train around England, occasionally diverting into sidings to discuss opera, poetry, music, films, pubs, art and Lancashire comedians. Not many authors could weave Sooty, Kathleen Ferrier, the Beach Boys, Tom Finney, Adolf Hitler and sex scandals into a coherent narrative. Pet sounds do not include Oasis, dismissed as a “Beatles tribute band.”

Names are dropped more often than slip catches on a chill April morning. We learn comedian Ken Dodd rang Henderson for advice after being mortified by adverse publicity when fans walked out of one of his shows. Reviewers failed to comprehend Doddy’s habit of over-running meant many audience members left to catch last trains or buses, not because they were dissatisfied.

Other significant friendships were formed with conductor Simon Rattle, who found Henderson a seat among the orchestra at one of his concerts, while playwright Harold Pinter and former England captains Michael Atherton and Bob Willis were among his dining companions. He has tales about them all.

Henderson also airs some story gems like Rochester cathedral staging crazy golf which he discovers on a Kent visit. He laments the passing of out grounds like Blackheath, Maidstone, Folkestone and Dover but omits to mention Gravesend. Out ground closure, he discovers, is a common theme among counties putting eggs in one basket by diverting financial resources into developing their headquarters.

The former Daily Telegraph cricket correspondent, who has also written for the Guardian, Observer, Times and Daily Mail, notes that once-packed county ground press boxes are now mostly inhabited by just a couple of local writers.

Is this indicative of a county game now dominated by the one-day cash cow, he wonders. If county cricket eventually collapses, that will be England gone.

That Will Be England Gone by Michael Henderson is published by Constable. Price £20.