A new book charting the progress of French international football from the dark days of 1966 to 2018 world cup glory is reviewed by ERIC BROWN.

They arrived like an invading army and soon captured the hearts of English football followers.

They brought the type of panache associated with a Paris fashion show and the style displayed by dancers at The Crazy Horse nightclub.

French footballers sprinkled a generous helping of stardust over the Premier League with a cast list equivalent to a Hollywood blockbuster.

You could almost smell those aromatic French cigarettes in the air when you visited Arsenal, Chelsea or Manchester United.  But the French were not just show-boaters intent on a huge pay day. Most of them scooped major English honours and many more on the European and world stages too. 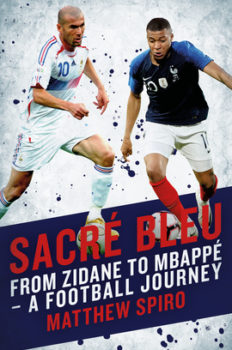 French footballers left the English behind in terms of technique, yet in 1966 deflated scouts and coaches from across the channel sought inspiration from Alf Ramsey’s world cup winners.

France finished bottom of England’s group and the party of technical experts who stayed on to study Ramsey’s tactics realised their players were desperately short of the physical prowess required to succeed at the top level.

The French embraced this lesson so quickly and successfully they subsequently won two world cups and the European title while England failed to make any finals.

How France rose, fell, then rose again is told in a new book “Sacre Bleu” by British journalist and broadcaster Matthew Spiro.

Spiro skilfully traces the emergence of world-class players from city ghettos imbued with strife through a volcanic mix of inhabitants from former French colonies.

He spoke with many of the personalities involved as French football was at first reconstructed through academies, then products from the world-renowned Clairefontaine training and education complex.

The wheel turned full circle when the Football Association sent Howard Wilkinson to Clairefontaine to study and examine how France churned out prospective world champions while English international football languished.

Spiro uncovered an adventure with more ups and downs than a fairground ride. From before the 1998 world champions were assembled to the 2018 second coming, from the France of Petit, Vieira, Zinedine Zidane and Deschamps to glorious successors like Kante, Antoine Griezmann, Kylian Mbappe and Olivier Giroud, the story  of French football has been littered with rows, fights and worse.

But teenage prodigy Mbappe came of age in that final in Russia with his skill and pace, raising eyebrows among even the most experienced coaches present. Zidane may have gone but he’s handed on the baton to Mbappe who may just prove to be the greatest French player of them all.

Mbappe, the boy from mean backstreets, has already broken a host of records in French league and international football. The youngest player to score twice in a world cup game already carries the hopes and expectations of a nation on his broad but still inexperienced shoulders.

Maybe in three, five or 10 years another chapter charting his triumphs will be added to a reprint of this excellent book.

Sacre Bleu, from Zidane to Mbappe a football Journey by Matthew Spiro is published by Biteback publishing. Price £18.99 hardback.

Mike Ingham autobiography out in paperback