Mike Ingham’s acclaimed autobiography will be universally available at the end of March when it is released in paperback. Ingham, for many years the football voice of BBC Radio, wrote his life story in 2019 as a hardback limited edition. However, After Extra Time and Penalties…Memories of a BBC football correspondent, was so well-received Ingham has been persuaded to publish a paperback version.

“Imagine being a national broadcaster and primo man in your profession and yet being anonymous in public. I could wager that if you can conjure the sound of his voice, you would have no idea what he looks like.”

The words by John Nicholson of Football 365 ring true.

Ingham’s autobiography is a wonderful evocation of a career in radio sport which began in a golden age.

In the early 1970s, Ingham’s first steps were at BBC Radio Derby. This coincided with the Baseball Ground tenure of one Brian Howard Clough.

It says much for both parties that when Ingham headed for London to join the Radio Sports Unit, his father was able to solicit a valedictory just by knocking on Clough’s front door. 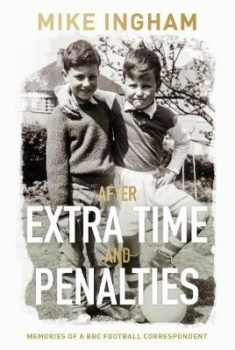 “Mike, good luck to you. It’s far easier being interviewed by you than by your father. I hope it goes well for you and that you realise any ambitions that you have buried deep down or even on the surface.”

The first time Ingham read the sports bulletin on Radio Four’s Today programme, he ended with the racing tips. This prompted presenter John Timpson to say: “There you are then, Mike Ingham for a horse.”

When Ingham began presenting Sport on Two, he followed in the footsteps of  Desmond Lynam and Jim Rosenthal.

He also met a man who had been “the sound of summer on my radio ever since I first became aware of full tosses and maidens”. It was of course John Arlott.

Then in the mid-1980s, Ingham writes: “My life changed in 30 seconds. That’s how long it took BBC Radio sports editor Mike Lewis to tell me that I would try my hand at football commentary.”

This meant working alongside such masters of the art as Bryon Butler and Peter Jones.

“Although Peter must have spotted raw flaws in my work, he only offered guidance if requested and then would briefly advise ‘bit more light and shade or plenty of colour’.”

He devotes an entire chapter to Jones who had one of the most distinctive voices on radio. He was an inspiration to more than one young broadcaster.

In May 1985, Ingham worked alongside Jones on a fateful night in Brussels when a wall collapsed at the European Cup final between Liverpool and Juventus.

“For Peter Jones and I, the traumatic pain of Heysel was long lasting.”

Thirty years on plans for a documentary with former Liverpool defender Mark Lawrenson were laid.

“I agreed to do this with a heavy heart,” writes Ingham. He records that weeks went by until the idea was summarily dropped.

Ingham covered every major international football tournament from 1986 until his retirement in 2014. What he has to say about the future of BBC radio is hard hitting but reasoned and will strike a chord with many.

For anyone who loves radio sport the way it should be done, this book will be a delight.

After Extra Time and Penalties…Memories of a BBC football correspondent published by the Book Guild, is available for £12.99 at Amazon, Waterstones and online