Per Mertesacker was told he had no chance of becoming a professional footballer by his own father at the age of 14, yet overcame pain and criticism to become a world cup winner. 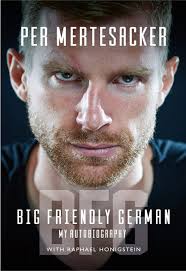 His story is one of triumph over adversity as he defied medical and family verdicts to scale the very pinnacle of football.

Mertesacker had to give up football in his teens with knees racked by pain and unsympathetic medical experts unable to agree on the cause. Even his father, a youth coach at Hanover, told him his dream of professional football was over.

“It’s the end of the line for you” he told a crestfallen Mertesacker. “You won’t make it anyway. Come on, let’s forget the whole thing. Professional football is off the table.”

His coach told him: “This isn’t going to work. You don’t have the right physical attributes and you are not quick enough.”

Mertesacker was advised he should concentrate on swimming but eventually the pool’s loss turned to  football’s gain.

After a few months the knee pain began to clear as it became apparent his problems were caused by a hefty growth spurt on the way to his eventual height of six feet six inches.

Back on the pitch he shocked his father by re-emerging as a thoughtful central defender who could suddenly compete for pace with the best at his age in the Hanover under-16s. Mertesacker was on the way towards a silverware-laden career including the top honour in the game.

It is a sobering start to German pal Raphael Honigstein’s biography which also provides a template for any aspiring young footballer presented with what appears an insurmountable obstacle towards a professional career.

His five million euros signing for Werder Bremen in 2006 was followed in 2011 by a hurried transfer deadline day switch to Arsene Wenger’s Arsenal where the French manager was desperate for a leader to shore up his leaky defence.

Mertesacker had to master English quickly so he could shout orders for fellow defenders and succeeded so completely he won three FA Cups with the club. Perhaps the highlight of the three came towards the end of his career.

With Arsenal facing a defensive injury crisis Wenger pushed an under-prepared and barely fit Mertesacker back into the team for the 2017 FA Cup Final where he played Chelsea’s formidable Diego Costa out of the game.

Mertesacker, ruled unfit for football at 14, made 147 Bundesliga appearances for two clubs, played 228 games for Arsenal, won 104 caps for Germany and in his final appearance helped land the world cup against Argentina in Brazil.

Not a bad career for a lad written off at 14 who remains down to earth about his own ability. He said: “Life isn’t always fair. Lionel Messi might never win the world cup. Instead he had to watch some blond beanpole who should have stuck to swimming leave the Maracana with the trophy.”

Big Friendly German by Per Mertesacker with Raphael Honigstein is published by deCoubertin Books. Price £20.