From a work experience runner on Sky Sports to a director and producer in high-end sports content, Claudia Corbisiero of SJA award-winning Noah Media Group has broken down gender barriers.

This profile was written by HEATHER MCLEAN, editor at Sports Video Group Europe, who has given permission for the SJA to publish an abridged version.

A passion for creative directing and producing in sports broadcasting has led Claudia Corbisiero around the world and back many times.

As a producer at Noah Media Group, an independent production company specialising in high-end sports content, most recently she was in Japan at the Rugby World Cup, and Corbisiero is now gearing up to get back to Tokyo for the Olympics next year, working directly with Olympic Broadcasting Services (OBS), the Host Broadcaster of the Games. 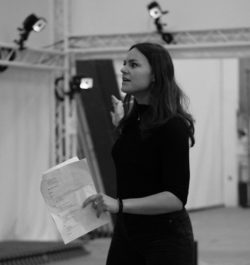 Sports has always played a big role in Corbisiero’s life. She explains: “I’m a big sports fan and always have been. I think sport showcases some of the rawest emotions humans feel; passion, patriotism, sacrifice, elation, devastation. Sport is the ultimate story of human endeavour and plays out in a concentrated period of time that’s often really well documented, which is great for storytelling.”

At the 2019 Rugby World Cup Corbisiero was tasked by IGBS, the Host Broadcaster, with creating a 50 minute short documentary review of the tournament, telling the most emotive stories she could find.

That meant, “finding and filming interesting people, places and players, utilising both the additional content crews travelling around for the tournament, a camera operator in Tokyo and my own camera, and then working with an editor to put these stories together”.

To tie this in with Japanese culture Corbisiero linked some distinctive Japanese cultural traits with traditional rugby values, like respect, bravery, and unity, and used these to punctuate the film. “I found a performance artist who created giant Kanji characters of these and filmed her painting our seven Japanese values and used these as a theme,” she said.

“Alongside this, I also produced 10 creative promos, filming with Taiko drummers, manga artists and at light museums and tea houses around Tokyo. It was an incredible experience; I fell in love with Japanese culture. It’s an amazing blend of tradition and innovation and so visually rich, which is wonderful to capture on camera.”

Tokyo 2020 is next on Corbisiero’s horizon. She says: “The project I am working on now is for Tokyo 2020, creating sport guides for OBS which essentially break down each Olympic sport for viewers. We decided to use 3D animation for these and set them in a futuristic Tokyo world, with the athletes represented by holograms performing their sport on rooftops against a neon backdrop.

“To achieve this, I directed a motion capture stage at Pinewood Studios, filming with about 50 athletes over a six week period to get the data needed for the animation. Whilst working on this project, I also produced and directed a campaign for UEFA Euro 2020 to announce their mascot, creating four promotional videos.

“Additionally, I travelled to Canada in July for a series we are creating for the IPC that follows young aspiring Paralympians. Next year I will be working on a promos team with OBS at the Olympics, producing creative content.”

It has been a meteoric rise for Corbisiero, whose first job was as a runner for the multi-sports team at Sky Sports.

“From a young age I loved cameras and video editing. A family friend was an assistant producer at Sky Sports and they managed to get me some work experience. I became friendly with the ‘pub sports’ team who worked on darts, speedway, snooker and pool. 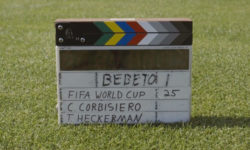 “I knew absolutely nothing about those sports, but the team were incredibly creative and used to produce some really interesting content which really stood out. When I left for university, I continued working on OBs and doing office days in my holidays or on weekends.

“I slowly began to produce the odd ‘story of’ feature or opener. When I graduated university, although still ad-hoc, I started working with editors and cutting more and more content for them, as well as working on their live productions too.

“Sky was an amazing place to learn the ropes. Being such a big organisation it could be quite intimidating at times, but it was filled with experienced creative producers to watch and be inspired by. Because the team I worked with did more marginal sports, it meant that there was room to try new things and push the boat out a bit creatively.

“I was lucky enough to work under Georgina Faulkner when I was there who was a great role model as a female producer in a senior position.”

Corbisiero moved to BT Sports’s production company Sunset+Vine in 2013 when she was appointed an assistant producer on rugby. She was just 22.

“Many of our production team were quite young and had limited experience in sports television so those early years were quite an adventure. Rugby coverage up until that point had been very traditional and BT Sport wanted to approach it in a completely different way.”

After two years working for Sunset+Vine she spotted an advertisement for a job on Gillette World Sport, a weekly magazine show that was broadcast globally. It entailed finding top athletes all around the world and crafting the interviews into five-minute features.

Not one…but two awards from @SportSJA awards last night for the @bobbyrobsonfilm ! We are over the moon! 🌙 🥂#sja2018 #sports #journalism #awards #productioncompany #television pic.twitter.com/p1pSL7auWC

She also spent six weeks in India for the 2016 World Twenty20 World Cup as a features producer for Sunset+Vine. Next in Corbisiero’s career progression was Noah Media Group in 2017 where she has worked on a great variety of projects, including additional filming for the Bobby Robson Film (Winner of two awards at the SJA 2018 British Sports Journalism Awards – Broadcast Production Team and Television Sport Factual or Feature.)

She did the same for the FIFA One to Eleven documentary series  and worked on the Premier League Productions title sequence while creating promos for Formula E, Cricket World Cup and Rugby League World Cup. She also went to Russia for the 2018 FIFA World Cup as promos producer, which was an intense six weeks of non-stop filming and editing.

She adds: “I was proud to be the first ever female promos producer at a World Cup for Noah, and I made the closer for the tournament. I spent a few days in the Russian space archives pulling together some amazing footage of Yuri Gagarin and Valentina Tereshkova (the first woman in space,) and doing some additional filming [see her work here].

Life behind the camera is not without its challenges for a woman who admits she has had to overcome a certain amount of bias and assumptions on what she ultimately wanted to be in the industry.

“The creative side of the sports TV industry was extremely male dominated, and still is. There was and is sometimes an assumption that you don’t know as much about the technical side of the game, so it was always important to have your facts right and be extra prepared to create the right first impression.

“I often found it frustrating that people you’d meet when working would assume that you wanted to be in front of the camera. It meant that you were constantly trying to assert that you actually wanted to be a creative producer and this wasn’t just something that you were doing to get on TV!

“Sports broadcast has taken longer than other working environments to become diversified but it’s getting better. Traditionally, women have done more of the organisational roles in sports broadcast, which is no small task as they are often the backbone of the whole production. However, I’d like to see more women directors, creative producers, sound engineers, camerawomen, EVS ops etc.

When you look in the production trucks at outside broadcasts you still see nearly all men in there, which is quite crazy for 2019

“When you look in the production trucks at OBs you still see nearly all men in there, which is quite crazy for 2019. On screen, it has gotten better though. It’s amazing to see more women commentators and pundits being included.”

Corbisiero has been fortunate not to have clashed too often with the old boys’ network but, when there has been an issue, she has hesitated to report it.

“Thankfully, most of the teams I’ve worked on over the years have been run by fair, decent people. However, there have been moments where things have happened that you’d like to call out, but you feel it might negatively impact your career.

“Things have changed in the last couple of years and there’s more support for women when they do need to speak out about bad behaviour. I’ve tried to let my work do the talking and be the most efficient, most creative producer that I can be.

“It’s important that when women join sports broadcast companies at entry level they are not immediately funnelled towards production coordinator roles. This will be easier when more women are in senior or creative jobs in sport production, so younger women can envision themselves doing the same thing.

“At Noah, I’m proud to say that nearly half of our company are women. I’ve always thought that it’s incredibly important for women to help each other in this industry and I make sure that female researchers, edit assistants and producers at Noah know that I’m there for them if they ever need help or support.

“I want to set a good precedent for them, as has been set for me by other women that I’ve worked with, that women don’t need to be pitted against one another and that we’re stronger when we help one another.”

Entries are open for the SJA 2019 British Sports Journalism awards sponsored by the National Lottery and Canon. Please click HERE