Nostalgia rules as ERIC BROWN reviews a new birthday book celebrating 50 years of one of football’s most iconic magazines.

It’s August 16, 1969 and the Rolling Stones’ Honky Tonk Women is in the middle of a five week run at the top of the charts while the whole world still tries to digest the achievement of Neil Armstrong and Buzz Aldrin by walking on the moon just three weeks earlier.

It was also the day a new football magazine hit the newsstands. With England’s world champions preparing to defend their title in less than a year there was only one player to feature on the cover.

England captain Bobby Moore, in West Ham colours, fixes his eyes on the ball as he dispatches it right footed in typical elegant style. 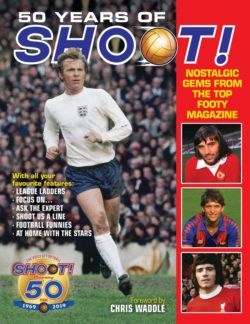 Yes, Shoot had arrived at a price of one shilling including a free gift of those league ladders where you moved the clubs up and down after each week’s matches still usually staged on Saturdays.

So it’s not just the amazing moonshot that has celebrated a 50th birthday but also the football mag the stars write for, as they boasted. To mark the occasion, Carlton Books has produced a publication featuring 175 pages of the best bits from 50 years of Shoot.

Moore, of course, was among the columnists. He was so revered that the magazine gave away a free seven inch stand up model of the England skipper with early editions.

George Best, Allan Clarke, Mick Channon, Tony Currie and Malcolm Macdonald were among many others who penned articles for the magazine. In his column, Kevin Keegan supplied the inside story of his horror cycle crash in TV’s Superstars programme while Moore came up with a rather sanitised version of the Bogota bracelet incident.

The pictures are a real hoot. Players sport ski-slope sideburns, Beatle haircuts and mullets. One image of John Toshack makes the Liverpool legend look as though he’s wearing a black tea-cosy. Shorts are tight enough to bring tears to your eyes.

There are plenty of examples of the popular Focus pages. Forms were sent to clubs for players to fill in about their favourite player, most difficult opponent, biggest thrill etc. Players still had modest cars then with Channon’s form revealing he drove a Wolseley 1100. Under Which Person in the world would you most like to Meet,he cleverly nominated whoever presents the winners’ medals at the next World Cup.

One player nominated his biggest dislike as filling in forms !

I’d like to have seen a few more bylines to discover who wrote for the mag. There’s a picture of a slimline Chris Davies, while managing editor Peter Stewart and Roger Macdonald get writing credits. Otherwise articles are anonymous or carry player’s names.

It never quite matched the excellence of football’s greatest magazine Charles Buchan’s Football Monthly but Shoot made a valuable contribution to soccer literature in the teen market. This celebratory scan through 50 years of football allows readers to wallow unashamedly through ups and downs of the sport’s fortunes over those five decades.