JOE RIGBY, who has died suddenly, was one of those journalists without whom no sports department could function properly. Solid, dependable, no frills.

I first met Joe in the late 1970s when he joined the sports desk at the old Evening News. The first thing that struck me was that this bloke knew more about sport than I did. And that was some admission from me. 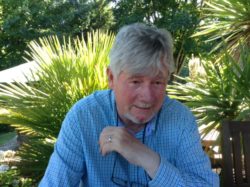 Any sport you cared to name, Joe (left)  had an encyclopaedic knowledge. Especially Rugby League. Throughout his career which, after the demise of the Evening News, took him to the Daily Express and Daily Mail, Joe waged a one-man crusade against the popular Fleet Street myth that Rugby League is a game played and watched by a few people at either end of the M62 motorway.

I remember one Monday morning. “Good weekend, Joe?”. “Excellent,” he replied. He’d nipped off to the south of France to watch some obscure rugby match.

Then there was a wet winter Saturday. On a train heading north to watch I think it was Scunthorpe United, word reached him that the match had been postponed. So he got off the train at Doncaster and headed off to Wakefield Trinity, or was it Castleford?

You won’t find Joe’s name on the honours board anywhere in Fleet Street, but for reliability, dedication and professionalism he was my idea of the perfect sports sub

Joe kept himself very much to himself and was neither pushy nor ultra ambitious. That’s how it seemed to his colleagues, anyway. He was very close to his twin brother Vic, a sports sub on the Sun.

In due course they decided to get married. Not that they told anyone. In fact, they ran off like young lovers to Gretna Green and tied the knot there.

Next time I saw Joe I congratulated him and suggested that Gretna (then a Scottish League team) must have been at home on the day in question. “No,” he replied straight-faced. “But Annan Athletic were, and that’s only just up the road!” If memory serves me right, they borrowed the club’s photographer as a witness.

For the past few years Joe was a valued member of David Emery’s Greenways Publishing empire, working mostly on The Cricket Paper and The Rugby Paper.

For a time he lived in a posh pad in St Katharine’s Dock, next to Tower Bridge. But lately he had returned home to the more familiar surrounds of suburban Surbiton.

He had a love of Arsenal and Surrey County Cricket Club. Despite that we got on well and met up twice a year at the Daily Mail sports subs reunion lunches at the Cheshire Cheese.

You won’t find Joe’s name on the honours board anywhere in Fleet Street, but for reliability, dedication and professionalism he was my idea of the perfect sports sub.