I should not have been surprised when I heard the news on Tuesday that Steve Curry had passed away following a bleed on the brain, because I had been telling him for years that he looked like death warmed up. 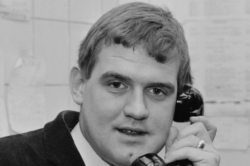 That was the sort of no-holds-barred banter that Steve and I had shared for more than 50 years. But his departure hit me like a Bobby Charlton shot to the midriff.

The use of the Bobby Charlton metaphor is deliberate, because “Lancashire and bloody proud of it” Steve was a walking record book on his beloved Manchester United, and Bobby one of his pals as well as idols.

We had sat alongside each other and ploughed the football-story fields for eight years as young Turks on the Daily Express in the 1960s/70s when the paper proudly claimed a 4m circulation, many of the readers drawn – we liked to think – by our stories, mixed and shaken with the opinions of giants of the sports writing game like Des Hackett, Peter O’Sullevan and Sydney Hulls and the waspish pencil of cartooning genius Roy Ullyett.

We were the Greavsie and Gilzean of football reporters. I worked quietly, Steve noisily. The cunning Cockney and the loud Lancastrian

Steve became my No 2 at the Express in the World Cup year of 1966, after the dynamic Clive Toye had been coaxed to America to sell football like soap (he didn’t do a bad job, enticing the likes of Pele and Bobby Moore to join the soccer-is-a-kick-in-the-grass party).

People who know me will vouch that I rarely boast, but I owe it to Steve’s memory to say that the two of us together were the football news reporters others followed. Between us we had contact books that included home telephone numbers for every major football personality in the land, and often it would be them calling us with stories and asking for the latest gossip from the village world that is the British football scene.

We knew everybody and everything, honest. If I didn’t come up with the goods, Steve did, and time and again the Express led the way with the stories that mattered. We were the Greavsie and Gilzean of football reporters.

I worked quietly, Steve noisily. The cunning Cockney and the loud Lancastrian. Steve was the son of a Methodist preacher and held his audience in awe as if in the pulpit. But usually he was not talking religion but telling the latest risqué jokes with the sledgehammer delivery of a Bernard Manning.

He was a born raconteur and I often used to tell him he should have been on the stage. He had been an accomplished actor at school and could quote Shakespeare with style and verve, and he had the looks and presence of an Albert Finney, with a Kirk Douglas dimpled chin. The ladies loved him.

He will not mind me telling you that he cried the day I handed in my notice to seek new writing adventures as a freelance, no longer chained to knowing that everything I wrote was the copyright of Express newspapers. I have been free (and usually broke) ever since tunnelling my way out of the Black Lubianka in 1973.

Steve took over my baton and became one of the best informed and informative reporters in the business. He did not hide his hurt when I left him out of my list of top 50 post-war sports writers, compiled for the Sports Writers’ Association (as the SJA was then known) where I was the resident old hack. If I had been naming the leading sports reporters he would have been in the top six.

Anybody who has ever listened to his often belligerent, always passionate, usually well-lubricated views delivered from behind (or leaning on) the bar of the pub he and his lovely wife Carol ran in Weybridge will know that our Steve was never short of an opinion or three.

We are all going to miss him desperately. A giant tree in the world of sports journalism has been cut down, and far too soon after our former Express team-mates Hugh McIllvanney and Jim Lawton. Too painful for words.

It was great listening to you, Steve. What a character. What a great bloody character. All the world was your stage.