As we slowly begin to come to terms with the sudden and untimely death of  Jim Lawton,  his former sports editor at the Daily Express, DAVID EMERY,  reveals how he persuaded  him to become chief sports writer. 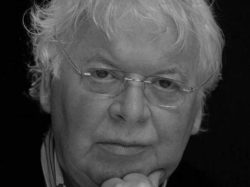 Of all the brilliant journalists and scintillating personalities Jim Lawton encountered in his glittering career, none had a deeper impact on his literary offerings than his wife Linda.

He may have quoted Dylan Thomas and idolised Hugh Mcllvanney but no-one held greater influence than his Linda.

When Jim  (above) was preparing his latest mini-masterpieces it was not to the sports desk, nor the colleagues next to him in the Press box, he would turn to with his perennial question: “Do you think this works?” It was the mother of his three daughters at home, first in Surrey and more latterly in a little village near Chester.

Even the greatest writer needs reassurance and Jim was certainly one of the greatest I knew in 30 years in Fleet Street.

So much so that when I became Sports editor of the Daily Express in 1986 and had to appoint a new chief sports writer there was only one man I wanted. James Lawton.

Snag was he was working in Vancouver having left the Express where we both worked as young sports journalists, frustrated by lack of opportunity and the propensity of the sub editors to cut his final paragraph.

I should explain. Jim subscribed to the McIlvanney method of feature writing.  Treat it like a boxing match.  Hit them hard in the opening round to gain their attention, find a rhythm for a while, smash them with a good combination in the middle and then land the ko at the end.

Trouble was Jim’s work was being counted out at round 11 due to lack of space and, yes, lack of sympatico among the more redneck pros on the subs’ desk.

One giant of sports journalism pays a wonderful tribute to another. Pat Collins on Jim Lawton… very special from our president @collinspatk1 https://t.co/CMVxkjhaUU #RipJim

I had rekindled my firm friendship with Jim during the 1986 World Cup in Mexico where we travelled to various exotic outposts to watch the Brazil of Socrates and the France of Platini weave their magic.

Jim captured it all so eloquently, of course, insisting in showing me his intros which I then had to instantly ignore for fear of plagiarism.At other times he would sit guru-like on the floor of the hotel while Canadian journalists from the Vancouver Star surrounded his burgeoning Buddha figure and lapped up the charismatic wit and wisdom.

He was clearly a towering figure on his new paper. “And do you know,” he told me. “They don’t change a word of my copy. Not a word!”

For all that the lure of a return to the Express proved great when I made the phone call.   Except that money there was tight. Jim would need his relocation funded as well as attractive terms.  Arguments ensued, I stood firm with the backing of editor Nick Lloyd again management protests.  In the end it was some of the best money the Express ever spent.

For me it was the start of ten great years as Lawton alongside Malcolm Folley and other fine journalists like Bob McKenzie, Steve Curry and Martin Hardy, backed up on the desk by Peter Tozer,  Charlie Sale, Clive Goozee, Frank Malley and Andy Elliott, reclaimed some of the Express ’fading glory.

Jim was at Hillsborough for the disaster.  He was unshakeable in his belief from the start. The police had made tragic errors.

As ever, he was bursting to get it all into print.  There were contrasting views, but editor Nick Lloyd by now knew his man. “Just let him write,” he said. And Jim did, thousands of anguished words which conveyed the full horror of that agonising event.

You’ve got me wearing Bermuda shorts. I’d never be improperly dressed while working for the Express

A somewhat lighter but similarly fearless episode for Jim came during the England cricket tour of the Caribbean in 1990. He had complained in print about the aggressive attitude taken by West Indies captain Viv Richards towards the match umpires. But this was Antigua, Richards’ fiefdom.

Richards did not lead his team out next day. Instead he marched into the Press box and berated Lawton. Jim admitted to feeling ‘a clammy dread’ as he was confronted by a cricketer built like a cruiserweight with a reputation for volcanic outbursts. The story made the front page lead in the Express.

Back in Fleet Street a week later Jim was recounting the episode in his column and celebrated cartoonist Graham Allen provided a memorable drawing of Lawton recoiling while Viv’s thunderbolts erupted around his person like high-power bouncers and Yorkers.

“You’ve got me wearing Bermuda shorts,” said Jim. “I’d never be improperly dressed while working for the Express.”  A few quick brushstrokes later and he was fully clad in pucker strides.

Jim was a socialist at heart with a deep Catholic sense of right and wrong. Drugs in sport were one of the biggest windmills he like to tilt against. Come the build up to the Seoul Olympics in 1988 and he was in full moral outrage. He wanted to write a doomsday scenario of track and field.

I demurred. The Olympics were really close to my heart. Let’s not debase the great event before it starts, I counselled. Let’s just enjoy the spectacle.

Then Ben Johnson happened. Jim write his account of the failed drugs test and filed. Perhaps he was mindful of my earlier remarks and did not wish to over-react. Whatever, it wasn’t the piece I knew Jim had in his heart.

This is your moment, I told him. All his prescient fears had been realised. The sporting world had indeed turned dark overnight.

An hour later, certainly no more than 70 minutes, Lawton provided the most powerful and coruscating dispatch of his life.  A Dylan Thomas-style polemic against the dying of the light, the end of innocence for sport.

It won acclaim everywhere. It also earned him his first Sports Writer of the Year award. I suspect he rang Linda from Seoul that night.