AN award-winning photographer whose work regularly adorned the sports pages of the nation’s newspapers during Brian Clough’s glory days – and who was once nearly shot down by police who thought that his helicopter was trying to free a great train robber – has died.

Les Parkin covered Derby County when they won Football League titles under Clough and Dave Mackay in the 1970s, and travelled with the club for their matches in the European and UEFA Cups.

After Forest won the European Cup, Clough allowed Parkin to take the trophy home for one night, so that he could get photographs with it.

Parkin’s son, David, a former Derby Telegraph reporter, said: “Cloughie also took the cup to a celebration dinner at a Chinese restaurant in Derby and phoned Dad to come and take some photographs. Dad was due to go out for dinner with friends so the legendary manager invited them all to join him and ordered champagne to celebrate. 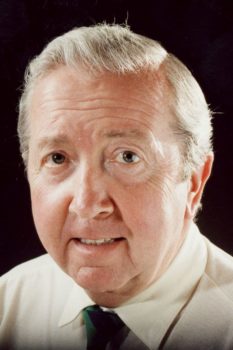 Parkin, who was born in Cardiff, arrived in Derby when he joined Raymonds in the 1950s. There he met and married the agency’s only female reporter, Pat, who later became women’s editor of the Derby Evening Telegraph.

David Parkin said: “Dad was born before the Second World War but he didn’t like his age being disclosed so I won’t start now. He left school with few qualifications and got a job aged 15 as an office boy working in the photographic dark rooms of the Western Mail, Wales’ national newspaper. He joined a Cardiff photographic and press agency as a photographer where he remembered being sent to get some shots of a boozy literary figure in West Wales called Dylan Thomas.

“Dad, aged about 18 or 19, spent three days living with the legendary poet at his boathouse home in Laugharne, sleeping on a mattress in the cupboard under the stairs. After two years’ National Service with the Royal Artillery and time working in London, he got the job with Raymonds.”

Former ITV, Sky Sports and Setanta Sports executive Trevor East, who began his career at Raymonds, said: “As a trainee journalist, I had the pleasure of working with Les for five years after leaving school in 1967. He was a brilliant photographer and a lovely bloke who would always find time to help a young lad learning his trade.

“He also possessed a fiery temper experienced by anyone who didn’t reach his exacting standards – and that included the owners on a fairly frequent basis, much to the amusement of the rest of the office.”

When one of the Great Train Robbers, Thomas Wisbey, escaped on to the roof of Leicester jail in 1966, Mr Parkin was sent up in a helicopter with his camera to get exclusive pictures.

He later recalled: “Suddenly there were armed police everywhere and they had their guns trained on us because, apparently, they thought we might be trying to pluck the prisoner to freedom. Cool as a cucumber, our colleague, Mike Kernahan, who was on the ground covering the story, got to a public phone box, as you did in those days, and told the police: ‘Don’t shoot. He’s one of ours’!”

Parkin junior said: “Dad had a bleed on the brain five-and-a-half years ago which, very like a stroke, severely affected his ability to speak and walk. That alone was enough but the doctors told us about a catalogue of other health issues, and how he lived so long was testament to his strength and spirit – and unbelievably devoted care from my mum.”

Parkin also leaves a daughter Kathryn. His funeral is at St Paul’s Church, Quarndon, Derby, on Tuesday October 23 at 2pm.