DAVID EMERY, former sports editor of The Express, on the force of nature that was Steve Curry.

It was the back end of the seventies and I was sitting in a Walton-on-Thames pub with Paul Seaton, Britain’s world champion water skier.

We were writing a book together and I had mentioned this to Steve Curry who lived nearby. He called in. Forty minutes later he had to go, leaving  a vapour trail of anecdotes, robust opinion and a couple of well-rehearsed jokes.

“My God,” said Paul as the door closed. “What a wonderful advert he is for the Daily Express!” 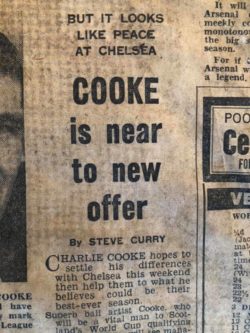 And so he was. When he chose to be, Steve was a force of nature, noisy, bombastic and wonderful, if slightly overwhelming, company.

As a first class football reporter and highly talented match correspondent, that apparently tungsten exterior and obvious adoration of the game made him a prize asset.

If Steve wanted you as a friend, his force of personality ensured he would succeed.

It all helped Steve to flourish among the big beasts of the football world in the seventies and eighties with an ever-burgeoning contacts book that would have been treasured by any sports department.

When Jimmy Armfield was tasked by the FA to canvas opinion about the England football manager to succeed  Graham Taylor in 1994, he asked fellow Lancastrian Curry. “Venables,” said Steve without hesitation, and Venables got the job.

With those proud Lancastrian roots, it was no surprise that Steve’s greatest football passion encompassed all things Manchester United.  Tommy Docherty and later Alex Ferguson were among his most cherished contacts.

The legendary Norman Dixon was in charge of Express sport on Fridays. Most other days, Steve required the sun to be on the streets before work began and stories materialised around 6pm. Fridays were different.

“What have you got for me, then, son?” Dicko would demand as Steve arrived around 1pm looking perky.

Back page settled, that was the signal for Norman to lead the charge down to the Cheshire Cheese.

And off we piled, full of gratitude for Steve’s ability, to pitch into platefuls of prawns, roast beef, bottles of red and a sheaf of used bills for expenses purposes.

Saddened to hear of the passing of Steve Curry. An old school sports’ journalist, fine writer for The Express and one of the good guys. Spent a lot of time with him over the years at various tournaments. He’ll be much missed. #RIPSteve

These were heady Fleet Street days. The Express was still selling some 2.5m a day and in fierce competition with the Sun, Mirror and Mail.

We had a stable of young talent: Curry, Jim Lawton, Malcolm Folley, Pat Gibson all forging their way.

We worked as a team and drank as a team, Steve holding forth with the latest joke he had probably purloined from Bob Cass of The Sun, or breaking into a rendition of  Henry V’s St Crispin’s Day speech: “And gentlemen in England now a-bed shall think themselves accurs’d..”

But for all that blustering exterior – “Excuse me, I know what I’m talking about” – rattled a few beer glasses, Steve had a vulnerable uncertainty that was revealed to a few.

Especially as a young man when he joined the Daily Express of Desmond Hackett and Peter O’Sullevan.

Legend had it that sports editor John Morgan, who employed Steve in time for him to help cover the 1966 World Cup, could make Curry fall from his office chair with a prolonged stare.

But it was the avuncular Morgan who saved Steve’s embryonic job when he reported the wrong date for an England match at Wembley and thousands turned up to find the ticket office obstinately shut.

Morgan also realised Steve’s great ability to mix and ensured he was present at every U18 and U21 England tournament where he could talk to the future stars, gaining their trust and their phone numbers.

I saw that pay off in 1975 when Dave Webb, the Chelsea  goal-scoring hero in the 1970 FA Cup replay with Leeds, walked out on QPR only a few months after joining. Fleet Street’s finest were sent in search.

In those days the end of the working evening meant the start of the drinking night and Steve and I, by chance, dropped into London’s Sportsman’s Club and there, playing roulette, was Dave Webb.

For a dozen other reporters, Webb would have clammed up or left. Being Steve, the Express had another exclusive within 30 minutes.

And it wasn’t just menfolk who fell to the silver tongue. In 1978 Chelsea were on the search for a new manager to replace Ken Shellito.

Back page settled, that was the signal for Norman to lead the charge down to the Cheshire Cheese. And off we piled, full of gratitude for Steve’s ability, to pitch into platefuls of prawns, roast beef, bottles of red and a sheaf of used bills for expenses purposes

Steve had the exclusive – Danny Blanchflower. Who’d told him? We bandied names. Steve struck a pose: I don’t reveal my sources.

Many months later he did. It was June Mears – wife of chairman Brian – who he’d charmed at a party.

Just occasionally Steve lost his sense of humour. Covering the 1986 World Cup together in Mexico, I slipped camp for 36 hours to fly to Puerto Vallarta with Joe Melling.

That night, try as I could, it was impossible to get through to London on the telephone to file an interview I had with German goalkeeper Harald Schumacher about his brutal foul on Patrick Battiston in the 1982 World Cup.

In desperation I called Steve in Mexico City – could he get London to phone me? He did and all was well. It was 3am.

Three nights later, at precisely 3am, my phone rang back in Mexico City. “How do you like it,” said Steve.

We had ten highly productive years when I became sports editor with Steve maintaining his story output, but it’s fair to say that he blossomed when he moved away from the hamster wheel of daily journalism and in to the more measured rhythm of the Sunday Telegraph.

Encouraged by sports editor Colin Gibson he used his copious contacts to investigate stories around the FA and Premier League.

Rightly he won the Sports Reporter of the Year award. It was a fitting reward for a man who dedicated so much of his life to football.