The little boy waited with excited expectation as his classmate moved between desks handing out birthday party invitations. But there was no invitation for him even though he had invited the others to his own birthday party.

The boy with ginger hair, freckles and skin white as a sheet was an outcast at school, subject to the unkindest cruelty. His gym bag frequently stolen, he was never picked for lunchtime football games.

He waited for the school bus but when the doors opened the other pupils shouted that he couldn’t  get on and blocked the way. The driver, just like his teachers, ignored the bullying and shus the door so he was forced to run alongside the bus.

“I don’t know what it was about me they didn’t like. I didn’t bother anyone. I was a quiet boy” writes John Arne Riise in his brutally frank autobiography.

Riise grew up to become a hero and role model for thousands of children but mental wounds inflicted during  schooldays often haunted his relationships. 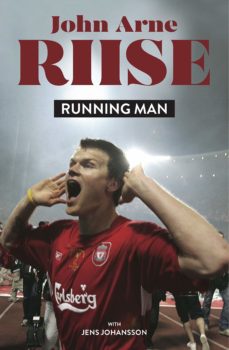 He never established a rapport with his father, admits to finding it difficult to hug his sister and has divorced the two mothers of his three children.

Before he started school, Riise’s drunken father left his mother and he often drifted off to sleep crying into his pillow as he listened to the sobs of his little brother in the next bunk.

Years later the by-now world-famous footballer was summoned to his sick father’s hospital bedside and looked forward to having a heart to heart discussion with the man he hadn’t seen for four and a half years.  He was welcomed by a nurse who said she was glad he made it because he was really looking forward to seeing his son.

The nurse  went into the room to teel Riise’s father he’ had arrived. As Riise stepped into the rom, he heard the bleep of a heart machine alarm and his father died without a word being exchanged between them. He reacted with sorrow and rage, knocking over a chair, pushing a bed and slamming a trolley against the wall. Perhaps it was guilt. Riise is still troubled by the memory of stopping for some food during his journey.

Football at least offered some sort of release from a tortured personal life. His mother’s training programme made Riise an outstanding athlete by his early teens and he soon held his own against much older opponents. He’d played 26 matches at Norway’s modest second division Alesund club  when he signed for Monaco to play alongside the likes of David Trezeguet, Fabien Barthez and Thierry Henry.

From earning £200 a month and a free travel card with Alesund, Riise was suddenly involved in a £2million deal which landed him ten per cent of the transfer fee at 17.

He was on the way to a glittering career which brought FA Cup, League Cup and Champions League glory during seven seasons at Liverpool and stints with AS Roma, Fulham, APOEL Nicosia and two Indian Super League clubs, finishing his career as the most-capped Norway player with 110.

By his own admission Riise spent most of his time convincing those who insisted he wasn’t good enough that they were wrong. Just how he did so makes entertaining, powerful and at times painful reading.