Lights began to flicker on one by one in the early hours of the morning as bleary-eyed souls reached for telephones whose insistent ringing interrupted their slumber.

Some journalists in the press village had been asleep for hours, others had just drifted off after a nightcap and chat about the day’s events.

The harsh intervention of those telephones set in motion one of the great sports stories: Hello, hello? Canadian sprinter Ben Johnson had failed a drugs test and copy was urgently required back in London from Britain’s sleepy Seoul press corps. 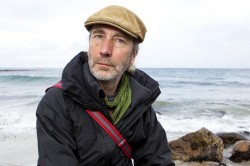 Brains slowly began to focus and concentrate on the job in hand. Among those aroused by the shock news was Simon Barnes (right), chief sports writer at The Times.

After breakfast he had more time to reflect. Did the Olympic Games still mean anything? Did sport? What was the point of sport, of life, of anything  In an attempt to locate answers has written a book reviewing the great sports events and personalities dominating his 32-year stint at The Times.

He has re-examined many of the events he attended and taken another look at the figures who tasted glory, disappointment and downright failure during that period. There’s plenty of substance. He attended seven summer Olympic Games, five football world cups, cricket matches on five continents, the Super Bowl, the World Series, the NBA Finals and the world chess championship.

While most of his subjects were triumphant, Barnes has not forgotten those less so.  There’s room for Quixall Crosset, a horse owned by Ted Caine and his wife joy at a North York moors stable. Quixall Crosset ran 87 races without a single win. Barnes reveals the emotional reason why this couple kept the horse running for so long.

Barnes has arranged his many interviews and assignments in chronological order for the book and adds an end-of-chapter update on the fate of his subjects. In his foreword Barnes insists this is sport’s story, not his, from 1983 to 2014 when his employment with The Times abruptly ceased.

It truly is an epic tale.

Epic, in search of the soul of sport and why it matters, by Simon Barnes is published by Simon & Schuster. Price £18.99.