Club histories are 10 a penny these days with many top clubs including half a dozen such volumes for sale on the shelves in their souvenir shops.

Most of them do a fine job encapsulating the ups and downs of their subject but often fall into the trap of “if you’ve read one, you’ve read them all.”

Now though comes a history with a difference. “Faith of Our Families” is an in-depth history of one of our oldest and greatest football clubs – Everton. What makes this tome different from its many competitors – there are at least half a dozen books claiming to be the official history of Everton – is that a story of almost 140 years football toil is told in a series of interviews with the people who were there, saw the events unfold or contributed to them. 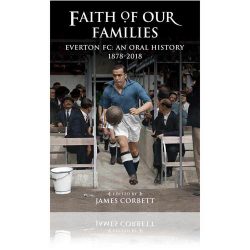 It features more than 200 original interviews with managers, players and supporters who provide unique insights into the changing fortunes of one of England’s oldest League clubs.

From the fledgling days as a church team of the 1880s to the modern-day search for a new home Everton’s rich history unfolds in the words of many of those closely involved in it. Mind you, predictions of a renaissance under Ronald Koeman have quickly become outdated.

Open this “dipper” history and a gem of a quote pops up on nearly every page.  Legendary goalscorer Dixie Dean says: “The best player I ever saw was our centre half TG Jones. He had everything. No coach could teach him anything. He was neater than John Charles.”

TG Jones on Dixie: ” Dixie Dean was Everton. He almost used to pick the team on his own. He used to go up to the office with a piece of paper and say ‘this is the team for Saturday’.”

Tommy Lawton: “We were paid £8 a week but nobody moaned.  When they put a contract in front of us we just signed, nobody ready it. We were just happy to be playing football.”

Graham Stuart on hearing the Z-Cars club theme tune blaring out before matches: “It meant to me I’m in the tunnel waiting to walk out and play for Everton. I’m excited and the hairs are standing up on the back of my neck.  Wherever I am, wherever I hear it, my mind goes back to standing in the Goodison tunnel.”

Award-winning author James Corbett has done a magnificent job assembling so many significant words on the Dean era, the Catterick and Kendall years and the many long spells Everton spent in the wilderness including relegation.

Here I must declare an interest. As an Everton supporter since 1959 I was contacted and asked to give my views on the club. I’m proud to say some of these appear alongside genuine Everton legends who all contribute to a remarkable story.

If you can’t play with boyhood heroes like Alex Young and Roy Vernon, appearing in a book beside them is the next best thing. 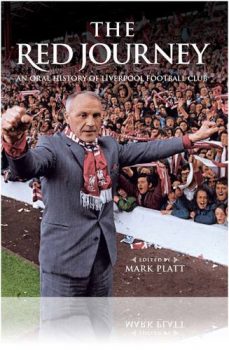 The same publishers have produced a sister volume on the Anfield club. The blueprint is identical, taking in Liverpool’s rise from the 1950s doldrums, plotted by Bill Shankly, on the way to becoming European champions.

Red or Blue, whichever side of the park your loyalties lie, one of these books will be an essential read. The bibliography at the end of both volumes is indispensable to collectors of books on either club.