Twenty years ago Ian Ridley collaborated with former England and Arsenal captain Tony Adams to produce Addicted. It broke the mould for traditional ghosted sports autobiographies, particularly because both Ridley and Adams are recovering alcoholics. 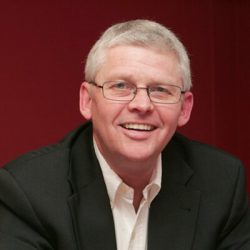 Two decades on and the pair have teamed up again with Sober (Simon and Schuster). Ridley (right), who worked for The Guardian, Observer, and Mail on Sunday among others is a prolific author and script writer and is the creator of Floodlit Dreams, publishers of sports books. He has also just crowd-funded a novel and is very involved in non-League football, currently at Salisbury but in recent years St Albans and Weymouth.

The SJA caught up with him.

How did your relationship with Adams start?

I knew Tony of course, with him playing for Arsenal and England and me a national paper football correspondent, but he had little liking for the press. We met properly, introduced by Paul Merson, when Tony got sober in August 1996. I had been sober from my own alcoholism about eight years by that time.

With Addicted, he wanted to get across to people who might have a drink problem that there was a solution and help available. I recall a wonderful moment when it was nominated for the William Hill Sports Book of the Year award in 1998.

It didn’t win but at the award ceremony, a waiter came up to me with a glass of mineral water and said: “I’m sorry your book didn’t win Mr Ridley but if it’s any consolation, I read this book a couple of months ago, realised I had a problem, went to AA and I’ve been sober ever since.”

The hairs on the back of my neck stood up. I rang Tony. “That’s why we wrote it,” he said. “Not to win awards but to help people.”

The advance for Addicted helped pay for the establishment of Sporting Chance, Tony’s charity that helps sportsmen and women with addictive illnesses such as drinking, drugs and gambling, and now other mental health issues. It is 17 years old and has a treatment centre, a nationwide network of counsellors and an educational programme going into sports clubs around the country. 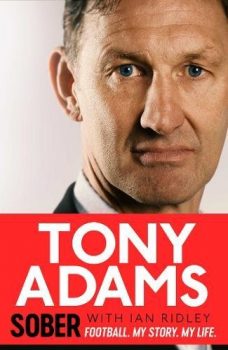 So why the sequel?

Tony wanted to do Sober 20 years on to show that it is possible to have a great life without the booze. He also wanted to tell people what happened after Arsenal. There is plenty of new material, including Sporting Chance and Tony’s times as Portsmouth coach when they won the FA Cup. He also talks about his experiences in Azerbaijan and China, when he suffered a heart attack in the former and virtually a nervous breakdown in the latter.

His relationship with Arsene Wenger spans the two books. It’s has been mixed, warm at times, cool at others, though both retain a fondness and respect for each other.

The serialisation was always going to be controversial when Tony questioned Arsene’s coaching. The book goes into much more detail.

What stimulated your interest in the game, first writing about it as a journalist and then running a club?

Being taken by my Dad to see Weymouth Football Club, thinking it was magical, even though it was non-League football. It wasn’t. Seeing my hero Jimmy Greaves on TV and being taken to Spurs by an uncle.

When it dawned on me that I wasn’t going to be good enough to play for a living, I thought it might be nice to write about it. I took the traditional route of weekly, evening paper (Evening Post-Echo, Hemel Hempstead) then national, making The Guardian at 25 and having 10 years there.

Having seen football for long, I thought I could do better at running a club than many who were doing it. After an eye-opening wrangle, I got control of my home-town club Weymouth before it all went sour.

After a short spell as chairman of St Albans City FC, I’m back now at Salisbury FC after my old mate Steve Claridge asked me to help after the old club had gone bust. Being involved gets under your fingernails.

Your name was a familiar one on the football circuit. What caused you to call a halt?

I haven’t quite stopped. I do a column now and then for the Non-League Paper and will write for papers if asked.

I grew weary with the Premier League and its bloated excess as well as its control of journalists and journalists. I saw the written press being marginalised, treated with contempt. Rights holders are the cash cows and get preference, even though the printed press, and associated websites, reach more people.

Newspapers don’t help themselves these days, either, with some of the dross they post online.

Who are the sports journalists you admire?

There are some wonderful sports writers still out there that I urge people to read. I will always love Paul Hayward in the Telegraph and Dave Kidd in the Sun. I think Ian Ladyman in the Mail is a great all-rounder, fine writer and good turner of stories. And James Gheerbrant in the Times is a major new talent.

What inspired you to set up Floodlit Dreams?

A publisher pulled out of a controversial book I was writing with Mark Halsey, exposing some uncomfortable issues and incidents about refereeing at the highest level.

Mark and I were outraged and got it out there on our own. It gave me the taste for publishing. I was seeing good young writers not getting a chance and was proud to publish books like The Boy In Brazil by Seth Burkett, a young lad who played as a pro in Brazil for a year.

Then there was Football’s Coming Out, where I paired Seth with a guy called Neil Beasley, a gay player and football club chairman. It was longlisted for the William Hill.

An old pal, and brilliant Mail sports journo Alan Fraser, wrote a wonderful book for Floodlit Dreams called The Hitler Trophy, about how the Fuhrer had ordered a golf tournament for his propaganda 1936 Olympic Games, then refused to present the medals himself when two Englishmen won.

What advice would you give to youngsters?

It is tough. There are plenty of outlets, more opportunities to write, but not many paying properly. I feel for them. Persevere. Offer your services to media outlets and sports editors but do try to get paid. Talent will out.

‘A lot of young people say they want to be sports journalists because they love sport. I would like to hear them say they love the writing’

A lot of young people say they want to be sports journalists because they love sport. I would like to hear them say they love the writing.

It is a great trade, an art form almost when done well. Read those who do it well – my hero was Frank Keating of The Guardian and I can still remember, 40 years on, sentences and phrases he wrote.

Read those I’ve mentioned above – Dave Kidd, Paul Hayward, Ian Ladyman – and also Marina Hyde of The Guardian. Not strictly a sports writer, though she turns her hand to it entertainingly and acerbically, but brilliant on everything.

Also, remember that whatever the outlet – 100 people reading it on blog, 1,000 reading on a website or 1 million in a paper – put the same care and effort into it.

You have also entered the world of fiction writing with a novel. How did that come about?

After I left full-time sports journalism, I wanted to write the novel I had always threatened. Thankfully, my wife Vikki Orvice (athletics correspondent of The Sun and SJA committee member) backed me while I took time out.

It’s set in Regent’s Park, which I know well from having gone to University there, and throws together five random characters in the aftermath of an atrocity. Is it a terrorist attack or personal? Religious or political? I hope it can be called a literary thriller with some state-of-the-nation observations amid that.

I guess one of the characters is loosely based on my own experiences, since he has cancer and I do too, and the world of newspapers also figures prominently. Once finished, I tried it on several publishers and agents but the process became so tortuous that I grew frustrated.

Then I spoke to an old pal who had the same experience with the traditional route to getting a novel published, the comedy writer Andy Hamilton. He told me about Unbound, a crowd-funding publisher.

We’ve just entered the editing and production process and it’s been a good experience so far. I guess I will know more when it’s out in October and I see how sales go. That’s where it can be good for an author – you get half of the sales revenue, as opposed to small royalties.

The opposite side of that coin is that there is no advance, though, so you have to be committed to writing the book without reward.

What’s on the horizon?

I have written a film script of the book I wrote with the boxer Darren Barker, A Dazzling Darkness, and I sent it to Ray Winstone. He loved it, but it’s been a tough process getting development money for it. We’re still working at it.

Also, I like to follow up ghosting a sports person’s autobiography with a book of my own, and I have an idea for another football book…

(Sober. My Story. My Life. By Tony Adams and Ian Ridley, Simon & Schuster)

From newspapers to books, Calvin is still a winner

Folley back in fast lane thanks to Monaco passion