Michael Calvin, award-winning journalist, award-winning author, and long-time SJA member was 12 when he decided sports journalism was the career for him. He has never looked back. 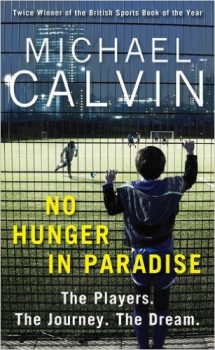 He won the SJA Sports Writer of the Year prize after taking a year out to be a member of the crew in an around-the-world yacht race and in 2015 he became the first person to win the British Sports Book Awards in consecutive years with The Nowhere Men and Proud (co-written with Gareth Thomas).

Prolific could be Calvin’s middle name – his latest offering is No Hunger in Paradise (Century, available April 20) which follows hard on the heels of co-writing Joey Barton’s autobiography. Luckily for the SJA, he has found time to answer some questions.

Q. Where did you start your career? What motivated you to become a sports journalist? Was that always your intended career path? Any inspirational figures behind your decision?

A. I was inspired by my first ‘grown up’ book, The Football Man, by Arthur Hopcraft. I was 12, captivated by the line “I am a reporter, trying to reach the heart of what football is” and beyond salvation. I abandoned my A levels at 17 to join my local newspaper, the Watford Observer, and within 18 months was in Fleet Street, with Reg Hayter’s agency.

I covered my first Olympics, at 21, for the Westminster Press group of regionals, and have been tap-dancing ever since. I have never forgotten my debt to Reg. I can still see him, rheumy-eyed, pecking away at an ancient sit-up-and-beg typewriter in the corner office. He taught me the value of diligence, versatility, empathy and low cunning.

Q. There was a time when we were described as ‘fans with typewriters’. (Presumably that should now be fans with laptops, tablets, smartphones and Twitter accounts!) As a writer on the road, were you also a fan? Or could you switch off, and treat it purely as a job?

‘My advice is to read and write avidly, constantly’

A. Not sure how something that takes a council house kid to more than 80 countries can be described as a job, but I’ve consciously kept the scarf and rattle at home. Journos who act as cheerleaders in a press box make me cringe. That’s not to say I’m emotionally disengaged, however.

Do I want athletes, coaches and managers with whom I have worked closely to do well? Yes, but not out of blind loyalty to a flag or an institution. I simply respect and admire them.

Q. What has been the greatest piece of advice you’ve been offered? What advice would you pass on to today’s young writers?

A. Reg Hayter encouraged me to read my work aloud – I’ve found that a reliable way of exposing cliché or laziness, since false words or phrases don’t sound right. My advice is to read and write avidly, constantly.

Q. How has the industry changed since you started out – apart from the demise of copytakers and the fight for phones during sporting events? Has it changed for the better? Or do you yearn for the good old days?

‘I see young writers with verve and style coming through. All power to them’

A. My generation probably had more fun (and were certainly better paid) but I’m not a great fan of excessive nostalgia. Change is not necessarily a bad thing, and I’ve never felt threatened by evolution. We’ve learned to become comfortable in front of cameras, and behind microphones.

I might detest the modern clickbait culture, and I am bored with listicles, but I see young writers with verve and style coming through. All power to them.

Q. You were chief sportswriter of the Daily Telegraph for many years – a period when you were named Sports Journalist of the Year and Sports Reporter of the Year, both on two occasions. Which of your columns and features have given you particular pride, and why?

A. At the risk of sounding daft, columns are like children: it seems faintly wrong to have favourites. I hope I’ve delivered a consistent seven out of ten, and given the reader pause for thought. If you press me to isolate a particular project I enjoyed, I’ll have to highlight my round the world sailing columns, if only for their novelty value.  David Welch (late Daily Telegraph sports editor) didn’t bat an eyelid when I told him I needed a year off diary.

Q. You have diversified over the years. For a spell, you were deputy director of the English Institute of Sport, you founded a consultancy that advises a wide range of sports bodies, and, of course, you have been author of a burgeoning library of books. Are you obsessively attracted to developing new areas of interest?

A. It is not a conscious effort to stay ahead of the curve, but I’ve always had a “why not?” attitude. I learned so much about how sport works, politically, commercially and strategically, by working inside it for four years, before I became tired of the blocking tactics of mediocrities.

Though most of my career has been spent on broadsheets, I loved being exposed to the intelligent populism of the Mail on Sunday, where the columns of Pat Collins [SJA President] were poetry, laced with poison. My time under David Walker [former SJA chairman] as the Sunday Mirror’s columnist reinforced my respect for red top colleagues, who must blend brevity with impact. The books were a natural progression.

Q. Your book Family: Life, Death and Football, which chronicles your year ‘embedded’ in Millwall Football Club, was originally self-published.  Would you recommend it?

A. If I, as someone who finds changing a light bulb a technological challenge, can do it, anyone can self-publish. It is a relatively straightforward process, though distribution can be a pain. I was told Family had a limited audience, but it sold around 22,000 copies (and I was able to sell second edition rights to a publisher) because its fly-on-the-wall style struck a chord with fans of all clubs.

Journalists have natural PR and marketing skills, so I would encourage prospective authors to give it a go. Someone like Ian Ridley, whose Floodlit Dreams imprint is flourishing, is a brilliant example of self-publishing’s potential.

Q. Many sports writers sign up for celebrity collaborations to augment their incomes, the ‘alcohol and angst’ route. You ghosted Joey Barton’s autobiography but you clearly prefer more thematic work, with your award-winning football books

A. Up to a point. ‘Alcohol and angst’ implies superficiality, which cannot be further from the truth when writers of the quality of Paul Hayward, Donald McRae and Oliver Holt become involved.  My approach to collaborations with Joe and Gareth Thomas was identical to my other books, in that I sought to immerse myself in their lives and times. That’s an intimate process, because as a co-writer (I hate the term ’ghost’) you have to get behind the eyes of your subject.

I am very proud of ‘Proud’ because of the impact it has had, in telling Gareth’s story with brutal clarity, but affecting tenderness. There were times when I wondered whether I had pushed him too far. When you interview someone, standing above a 200ft drop on a rock from which he once intended to commit suicide, it is a searing experience. His immense moral courage has been rewarded because so many people have told him they were inspired by the book.

Q. Nowhere Men looked at the world of football talent scouts and Living on the Volcano explored the pressure on football managers. Your next book No Hunger in Paradise: The Players. The Journey. The Dream (to be published by Century, 20 April), is the inside story of becoming a professional footballer. What inspired you to look at these topics? 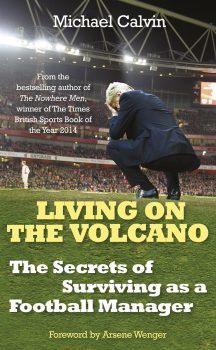 A. Their humanity, in a word. I spent 15 months on the road with the scouts, and was assimilated into their culture. That enabled me to understand their lifestyle, and the frustration which underpins what is a twilight world.  I’ve always wanted to get under the skin of football managers. They have one of the most exposed jobs, but tend to protect themselves by creating a professional persona.

They welcomed the chance to talk in depth. They were honest about their frailties and insecurities, talking openly about mental health issues and fractured family lives. I’ve spent around 18 months putting No Hunger In Paradise together, and I’ve tried to understand the power of that great dream, beating the odds and making it as a pro. It is a huge and complex subject, shocking and uplifting in equal measure.

‘What is the game doing to our kids? Clubs exploit fear and insecurity’

Q. What most shocked you about the process of the football production line?

A. The way in which the ills of the senior game, greed, opportunism and amorality, have infected youth football. What is the game doing to our kids? Who can a talented boy trust?

Clubs exploit fear and insecurity. Bad parents help to commoditise their children, and good ones lack structured support. Unprincipled agents are exploiting an under-regulated world. What do the excesses excused by football’s prominence say about us, as parents, participants or observers? I hope the book helps to simulate a long-overdue debate.

Q. Have you been surprised by the success of your books at a time when we are told that only celebrity sells books?

A. Humbled is probably a better word. There is a definitive move away from what I call ‘I was lucky enough to score a hat trick’ books because the modern reader requires depth and insight beyond a recital of past performances.

Q. Talking of Joey Barton, how was he to deal with? Is he bright and insightful – or just thinks he is?

A. Every day is an adventure with Joe. He is as aware of his faults as anyone, but I found him great to deal with. I’ll admit to having reservations when he approached me, because I had given him a kicking in several columns, but he did everything I asked of him.

He is an avid reader, and has a restlessness and curiosity about him which I found attractive. My motivation, in writing No Nonsense with him, was not to make the reader like him, but to provide a chance to understand him. I’ll leave it to you to decide whether I succeeded.