LOUISE TAYLOR, the Guardian’s north-east football writer, has penned her personal take on the David Moyes sexism row in today’s edition of the paper. 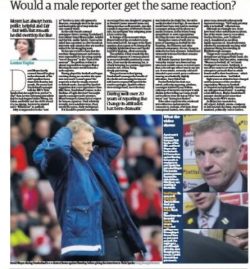 David Moyes hardly covered himself in glory in the aftermath of his side’s goalless home draw with Burnley last month.

No sooner had Sunderland’s manager told the BBC’s Vicki Sparks that she might be in peril of  “a slap”  then he was informing journalists that he had dropped Didier Ndong, his Gabon midfielder and the club’s record £13.5m signing, because he wanted  more “Britishness” in midfield.

Fifty is supposed to be the “new 30” but the 53-year-old appeared a  dinosaur, seemingly stuck in the 1950s and thoroughly out of step with the  21st-century world.

As the only female national newspaper writer covering Sunderland I have always found Moyes polite, helpful and fair but, unlike Sparks, I have never asked him a question in a live broadcast interview only minutes after yet another setback for his struggling team.

Moyes could face punishment from the Football Association after threatening jokily to slap a female reporter and saying “Careful the next  time you come in”.

He has since tried to claim that the resultant disappointment and tension were responsible for his acting entirely “out of character” in the “heat of  the moment”. The problem is that it is almost impossible to imagine Moyes directing the same words towards a male reporter. 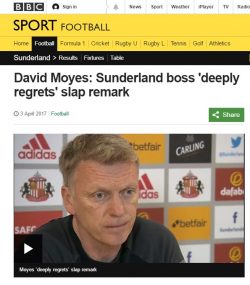 Having played his football and begun coaching during an era when the sport  was very much “man’s game” the suspicion is that he simply reverted to default mode. Annoyed by Sparks’s suggestion that a rare appearance from  Ellis Short, Sunderland’s owner, in the Stadium of Light directors’ box  might signify a manager under pressure, Moyes betrayed a latent lack of respect for women reporters.

Until relatively recently, such mindsets were,  if not exactly the norm, fairly widespread.  If it should be pointed out that he encouraged his own daughter’s progress  as a talented player in Preston’s junior women’s team and, during his time  on Merseyside, was also a staunch supporter of Everton’s female side, his  apologists’ key mitigating point is less convincing.

In footage of the moments when Moyes believed the recorders to have been switched off, his anger at the Short question does appear to be leavened by a slightly lighthearted tone and Sparks herself is laughing, albeit nervously.

The problem is that sounds like the awkward response of a woman placed in an uncomfortable position by a man who, if not exactly threatening her, is clearly behaving in a passive aggressive manner and, at best, being deeply patronising.

The good news is that (giving Sunderland’s manager the benefit of the doubt and assuming he was not told how to respond) Moyes felt the need to apologise, Sparks’s editors were outraged and, once the story was leaked to the Daily Star, the wider media decided it had legs.

At one time it would  have been very hard to envisage a manager picking up the phone in a similar  scenario, media bosses being sympathetic or news organisations deciding the  issue was remotely worth pursuing.

All female reporters have their own ‘everyday sexism’ anecdotes

During the course of well over 20 years of reporting on football for the Guardian, the Observer and other national newspapers, the sea change in attitudes has been dramatic, belated and extremely welcome but there remains some way to go.

All female reporters have their own “everyday sexism” anecdotes and my own  most notable cameo occurred more than a decade ago when I was in my late 30s. It was winter, seriously cold and I attended a post-match press conference wearing an admittedly slightly ridiculous, furry (fake!) hat.

Perched behind his desk on a raised, authority-imposing, platform, a manager irritated by my written criticisms of his tactics surveyed it with withering disdain before telling me I soon would not be able to wear the hat as I’d be  “too warm” and “having hot flushes”.

If the other reporters who overheard were either too embarrassed to comment  or, perhaps, a bit hazy about menopausal matters, two, older, male  press-room stewards subsequently expressed outrage. “He’d only get away with  it in football,” reflected one.

Although increasingly rare, there have been other unfortunate incidents. One of the worst came in 2009 when Gordon Strachan, now Scotland’s coach,  humiliated an excellent, highly experienced, female television reporter by persistently mocking valid questions during his unveiling as Middlesbrough  manager.

Things were compounded by our dictaphones picking up Keith Lamb, the club’s former chief executive, muttering “Women in football, eh” to Gareth Southgate’s successor. Suddenly, it was all too easy to see why Southgate’s attempts to persuade Boro to admit female staff to their boardroom – which now welcomes them – had fallen on deaf ears.

Eight years on attitudes have changed and the presence of the excellent organisation Women in Football -co-founded and splendidly chaired by my colleague Anna Kessel – is making a real difference.

Maybe Sunderland’s manager should spend some time listening to the WiF’s stories. As Moyes has reminded us, old school, default, sexism continues to lurk beneath the shiny, superficially sanitised, outwardly politically correct surface.

With thanks to Louise and The Guardian for allowing us to reproduce her article.