Summer can now officially begin. The latest edition of Wisden Cricketers’ Almanack was launched at Lord’s on Wednesday.

It is the 154th since John Wisden brought out his first, considerably slimmer, volume in 1864.

In the year of Brexit, editor Lawrence Booth claims: “This book has a more political edge than usual.”  Why it even includes contributions from Marks (Victor) and Engel (Matthew). 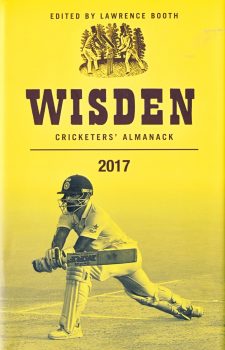 Nothing raises the spirit of  impending sunlit days like the appearance of the familiar bright yellow jacket adorned this year by India’s captain Virat Kohli, named leading cricketer in the world and shown executing a reverse sweep.

Australia’s  Ellyse Perry is the women’s international player of the year. Ben Duckett, Chris Woakes, Toby Roland-Jones and Pakistan pair Misbah Ul Haq and Younis Khan are named as the five cricketers of the year. Oxford schoolboy AJ Woodland is schools’ cricketer of the year.

This year’s volume runs to 1,536 pages and was for the first time, printed in Italy. The majority of pages are on the type of paper you’d find in a hymn book, appropriate for a book that is often described as the cricketer’s bible.

It is truly a marvel of modern production. It  went to the printers little more than a fortnight ago. In its pages can be found  a full account of England’s disappointing winter tour of India.

Forty years ago, England also toured India, but production deadlines in those days were much earlier, so the detailed report was deferred to the 1978 edition.

In those days, as one-time editor Graeme Wright told me, the book was printed in stages amd was “a whole different ball game.”

That 1977 edition included a historic photograph…women playing at Lord’s for the first time. The 2017 version also depicted the 1976 England women’s team led out by the late Dame Rachael Heyhoe Flint. Her recent death is recorded by Clare Connor as “a Peer without peer.”

Flint not only played the game, but did more than anyone to raise its profile in the 1970s by writing and broadcasting when coverage of women’s sport was scarce. The debt to her felt by every woman cricketer since is keenly felt.

In the 2017 Wisden, the women’s game receives 40 pages. That would surely have delighted Dame Rachael. Barney Ronay’s review of cricket in the media is ominously entitled “Goodbye to all that.”

It chronicles the departures of Mike Selvey and Steven Brenkley from the print ranks, Tim Abraham  from Sky Sports. It is telling that there is a page on cricket and Twitter as part of a wider “Cricket and blogs”.

BBC Radio’s Test Match Special  (TMS) is 60. Matthew Engel calls the programme “a miraculous survivor” even though the programme has altered radically since the days of John Arlott and company.

TMS producer Adam Mountford says: “The big change is social media. I might have to ask Graeme Swann or Michael Vaughan to do half an hour on Facebook, taking questions from the audience.”

The programme began life in 1957 with the England v West Indies series but poignantly the Almanack carries the obituary of one of the finest Caribbean cricket journalists, Tony Cozier.

As befits a game so heavy with statistics, even the tables at Lord’s were numbered to reflect moments of cricketing history. Your correspondent was sitting at table 1,107. Not a new record for tables in the Lord’s Long Room but reflecting Victoria’s massive total against New South Wales in 1926.

Others were numbered 99.94  (Sir Don Bradman’s test batting average) and 19-90 (Jim Laker’s bowling analysis v Australia in 1956).  The statistics are of course the thing.

Page upon page of scorecards, each accompanied by a least a paragraph summarising every match of note though, disappointingly, only line scores are given for England’s warm-up matches in Bangladesh and India and also for the majority of T20 and Royal London Cup matches in the English domestic season.

The records are correct to 31st December 2016 and there is even an index of “Unusual Occurrences”.

They also serve who record the game. Saqib Majeed’s photo of cricket in Kashmir won the Wisden MCC Photo of the Year award and Emma John’s ‘Following On’ was selected as Wisden Book of the Year.