My telephone relationship with Steve Bunce began more than three decades ago when he became a regular supplier of words and results to the Extel sports wire, writes PAUL TROW.

And, as a regular listener to Radio Five Live’s Saturday morning output I was delighted when his Big Fat Short History of British Boxing dropped through my letterbox. 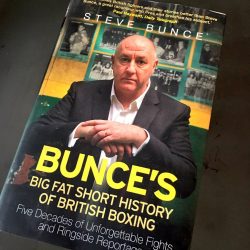 This historical snapshot of a noble, yet brutal sport is brisk, thorough and relies heavily on personal recollections. I read this 436-page chronicle inside a week – slow going for a reviewer, admittedly, but a lot quicker than my norm. On that basis, it qualifies as a potboiler.

I have been a fascinated, often repulsed, observer of boxing for more than 40 years since my days on the Hendon Times and Morning Advertiser so I was attuned to the 1975-1992 pages. They do not disappoint with the sharp recollections from that period.

One assumes that Bunce’s coverage of the ‘sweet science’ during the years before and since was equally forensic. Bunce’s admiration for the men who get into the ring is unbridled. His protagonists are exceptionally brave and, on the whole, paragons of honourable and virtuous behaviour.

Almost all have a seriously interesting story to tell; from their origins, to what boxing taught them as they progressed, sometimes haphazardly, from youth to adulthood.

The book unfolds with seemingly throwaway remarks that turn out to be analytical gems. From Henry Cooper to Anthony Joshua, all the sport’s headline makers for half a century are refreshingly distilled.

This dialogue between referee Harry Gibbs and Joe Bugner before the infamous and controversial fight that ended Cooper’s career in 1971 sums it up perfectly.

“Then Gibbs went to see Bugner. He looked at the blond fighter, not really his type of fighter, and then started growling. Gibbs: ‘No hitting on the break, no hitting on the back of the head, leave his kidneys alone and no foul blows.’ Bugner: ‘F***, Harry, am I allowed to touch him’? ‘Don’t be cheeky son’.”

And after the recent death of gifted 1980s middleweight Errol Christie, to read this poignant account from 2015 was heartbreaking.

“Christie was waiting for prescription eye drops in a chemist when a special anti-terrorist unit bundled him to the ground. It was a mistake, but he took a knock to the ribs. ‘I knew what to do, I let them put the cuffs on me,’ said Christie, a veteran of years of fighting on the streets of Coventry.

“The armed police apologised. He went to hospital to get the ribs checked, had an X-ray and the ribs were all fine. But the doctor spotted something else. Poor Errol was diagnosed with lung cancer and chemo started.

‘But the doctor spotted something else. Poor Errol was diagnosed with lung cancer and chemo started’

“I saw him a week later and he was getting ready for another fight. ‘I don’t smoke, Steve,’ he said. ‘I think it was all those smoky working men’s clubs and halls. They were always full of smoke.’ He is right, they were. He was 52 when he was diagnosed in March.”

Every page bristles with such revelations. The unsentimental tone of this book underpins the moral codes by which the fighters, trainers, matchmakers, cuts men, promoters and even agents all live.

The world is full of ex-boxers, and most of them have regrets and tell hard-luck stories, suffer addictions and succumb to irresistible temptations. Bunce looks at them all through a prism that reflects sympathy and magnifies realism.