Once a year rugby league attracts Fleets Street’s finest to Wembley to marvel at what Simon Barnes, former sports doyen at The Times, once described as “the flagrant, naked confrontation” on display at the Challenge Cup final. 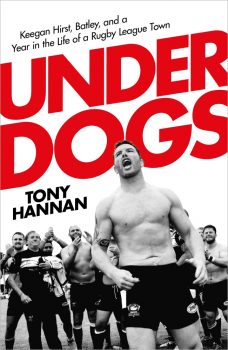 Apart from that – and of course a Grand Final at Old Trafford – rugby league on a weekly basis scratches around in the M62 corridor which defines its northern heartland, struggling to penetrate the national media away from Super League coverage on Sky.

Which is a shame because few sports have retained the values of honesty, hard work and pride, which underpin its history, quite like rugby league.

Rarely have those values been revealed with such clarity and candour as in the pages of Underdogs, a new book by Tony Hannan which focuses on what can be achieved when a sports club is at the heart of a community.

Hannan, a former Press Association journalist who is currently editor-at-large of rugby league magazine Forty20, was given an access-all-areas pass, every match, every training session, every huddle, to Batley Bulldogs for the 2016 season in the Kingstone Press Championship, the second tier of the sport.

This is not Wigan or Leeds or St Helens where top players can earn a tidy six-figure living.

This is Batley, a founding member of rugby league, the first club to win the Challenge Cup, but these days a world of builders, joiners, plumbers, firemen and rat-catchers, who train in their spare time and earn £250 if they are lucky – if they win.

“At this level it’s about enjoying it,” says one player. “The amount of time you give up is totally disproportionate, probably works out at a pound an hour.”

The story revolves around three characters. A chairman in Kevin Nicholas, a lifelong supporter whose wife Bev manages the club bar and reckons her husband is “obsessed”. A straight-talking coach in John Kear, famous partly for his TV punditry but mostly for guiding Sheffield Eagles to a shock 17-8 triumph over Wigan in the 1998 Challenge Cup final.

‘The third is Keegan Hirst, Batley’s captain that 2016 season whose fame hangs on the fact that he is the only active rugby league player to have come out as gay’

The third is Keegan Hirst, Batley’s captain that 2016 season whose fame hangs on the fact that he is the only active rugby league player to have come out as gay.

He talks about his life of denial, the break-up of his marriage to Sara, caring for their two children and the support he received from teammates, the latter painting the inclusivity of the sport in a favourable light.

Until, that is, Hirst misses training after missing a flight after over-sleeping following a gay-pride event in London. Dressing room disharmony follows at the sharp end of a dramatic season and Hirst is dropped and fined.

Beautifully written and infused with dry humour, there is also an energetic and important debate on why rugby league has failed to attract an Asian audience, nor aligned itself with ethnic communities in areas populated with generations of immigrants.

Mostly, however, Underdogs is an exploration of enduring working class culture with its extended family and a story of what can be achieved when a band of average but committed sportsmen take guardianship of their reputations.

It is rugby in the raw and essential reading for anyone with a passing interest in why sport really matters.

Underdogs: Keegan Hirst, Batley and a Year in the Life of a Rugby league Town is published by Bantam Press, price £18.99.

Simply the Best (the inside story of Wigan)