Think Liverpool of the 70s and 80s, the West Indies in the same two decades, Manchester United in the Fergie years – and then add Wigan in the 80s and 90s, and it’s a familiar, extraordinary pattern, writes ANDY ELLIOTT. 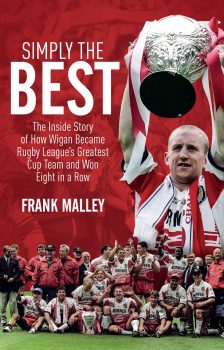 For fans of those super sides, it’s glory, glory and more glory. For fans of other teams, it’s boring, frustrating and makes you apoplectic with envy.

What’s more, when it comes to Wigan and that unbelievable era when they won EIGHT Challenge Cups on the trot, you have to admit that they were the greatest rugby league side of all time. As a Leeds fan, that comes through very gritted teeth indeed.

Frank Malley, formerly with the Express and chief sports writer at PA, has produced a glowing, compelling and entertaining tribute to that team.

Called Simply The Best (what else?), Malley’s book hears the testimony of 20 or so heroes from that side, many of them superstars who went on to transcend the sometimes narrow world of rugby league to become household names across the world of sport.

Malley gets close to those players and draws out some fascinating, funny, astonishing and often emotional anecdotes that provide an insight into what made Wigan so damned good but which also probably apply to those other great teams down the years.

Examine the methods of coach John Monie and you’ll see shades of Paisley or Ferguson. Listen to the driven passion of Shaun Edwards and you’ll hear echoes of Alan Hansen or Gary Neville.

Edwards, now a coach with Wales in rugby union, is the common thread through those remarkable times, having played in every one of Wigan’s 43 matches without defeat in the Challenge Cup.

Bear in mind that those years witnessed the fall of Margaret Thatcher and the toppling of the Berlin Wall; and the opening of the Channel Tunnel and the launch of the Premier League; and it’s somehow fitting that history was being made as a backdrop to Wigan’s own march into posterity.

Malley finds some interesting views on why Wigan were so driven – “Addicted to glory” as he puts it – and among the best summing up was that of one of their legends, Denis Betts, who said: “Winning was never as good as losing was bad.”

You won’t need to be a supporter of Wigan or rugby league to enjoy this – even though for opposing fans it’s a sometimes painful read. But, via the eyewitness accounts of those frontline troops – names such as Edwards, Ellery Hanley, Andy Gregory and Jason Robinson – it provides forensic evidence of why some sports teams are just so dominant at certain times.

For Malley, who is as Wigan as the town’s Pier, it’s a labour of love. So much in fact, that all royalties are going to a charity, the Joining Jack appeal to fight the incurable and terminal children’s disease Duchenne muscular dystrophy.

The charity was set up after the son of former Wigan player Andy Johnson was diagnosed with the disease at the age of four.

Jack is now eight, just beginning to fade and his parents realise they have only a few years to find some help.

You might have seen England back Owen Farrell linking fingers in the shape of two “Js” after scoring to publicise the charity.

And therein lies yet another link – Wiganer Owen is the son of another Central Park great Andy Farrell. There, in father and son, you’ll see the Wigan way personified.

Simply the Best: The Inside Story of How Wigan Became Rugby League’s Greatest Cup Team and Won Eight in a Row is published by Pitch Publishing, price £12.99 via Amazon and Waterstone’s.