An important new book explaining the often-violent development of football in Ireland is reviewed by ERIC BROWN.

Johnny Brown was born into the sharply divided city of Belfast in November 1915.

By the time he began to kick a ball around Ireland had experienced the Easter Rising, the loss of 5,000 men from the 36th Ulster Division in two days at the battle of the Somme and in May 1921 the creation of the Government of Ireland Act introducing partition to the island. 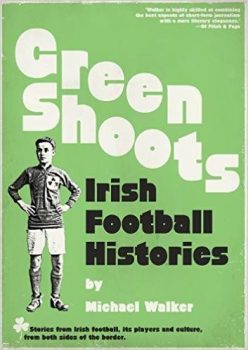 The story of the Protestant, who played for a Belfast club in the Irish League and represented Ireland on the international stage, somehow symbolises the confusing nature of football there.

Winger Brown was the great uncle of sports writer Michael Walker, who has worked for the Guardian, Irish Times, Independent and Daily Mail. His book about the development of Irish football reveals Brown’s role in a selection battle between the IFA and FAI.

He came from the Protestant Glentoran territory of Lecumpher Street but made his Belfast Celtic debut as a schoolboy international aged 16 in January 1931. Combining football with work as an apprentice printer, Brown was an established first teamer by the time Belfast Celtic reclaimed the Irish League title in 1933.

English clubs were soon alerted to the tricky winger with an eye for goal. Little more than four years after playing a schoolboy international he was making his debut in the English First Division for Wolves.  He made his IFA Ireland debut in a 2-1 defeat by England at Goodison Park.

Wolves rejected a Manchester United offer for Brown but sold him instead to ambitious second division Coventry City where he finished his first season top scorer with 13 goals. In 1937 he won his fifth Northern Ireland cap yet was called up for an historic tour with the Irish Free State, or Eire or Southern Ireland.

Protestant Brown was one of the first players selected from outside the jurisdiction of their 26 counties by the FAI but when challenged they responded that this was only what the IFA did. Eire beat Switzerland and then France, with a goal by Brown.

Eventually the association representing Northern Ireland (IFA) won their case to the International Football Association Board that the FAI were selecting players outside their jurisdiction. Brown’s FAI career was over.

He continued to play for Northern Ireland winning a 10th and last cap in 1939. Later he joined Barry Town of the Welsh League who raised the fee by staging a swimming gala.

They could not afford to keep him after failing to gain election to the Football League so Brown moved to third division Ipswich Town where he ended his career early in the 1950s.

On 7 July 1963 killed himself in Belfast aged 48. The man who played with Peter Doherty and Jimmy Dunne for Ireland and once bore comparison with Stanley Matthews is buried in Dundonald cemetery alongside mother Susan and father Thomas.

His tragic story allows the author a gateway to the often chaotic and violent tale of Irish football during the Troubles. Guns were fired and knives used at football matches and there were regular showers of the dangerous “Belfast confetti” on the terraces as sectarian disputes bubbled over. This consisted of nuts, bolts, rivets and anything else likely to cause injury,  plundered from local shipyards.

I became an unwitting target for something like this while covering a match between Bohemians and Glasgow Rangers in Dublin, diving for cover onto the press box floor as police positioned directly in front of it flinched from a missile bombardment.

I was also among a party of England players and press hurriedly evacuated from Windsor Park after a lorry had been discovered with a rocket aboard pointing at the ground.

Yes at times Irish football seemed complete madness. But Walker does a superb job of explaining it all in what must be the most significant examination of football there since Malcolm Brodie’s History of Irish Soccer in 1963.

It is brought up to date through George Best, Liam Brady, Jack Charlton, Johnny Giles and Derek Dougan.

My family in Scandinavia cannot understand why Ireland has two football teams.

And Walker points out in his introduction that Sweden, a nation of around 10 million, sent one team to France for the Euro 2016 finals while the island of Ireland has about 6.5million people yet sent two teams. Maybe I should send those relatives a copy of his book.

Run the London Marathon and raise money for Alzheimer’s