A giant of football journalism on Merseyside, Ken Rogers has assembled a wealth of memories and anecdotes from five decades of rubbing shoulders with the greats, writes ERIC BROWN. 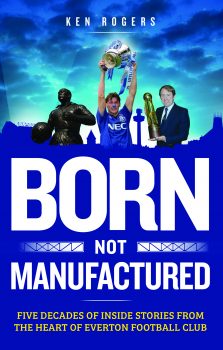 Years back many aspiring scribes discovered how difficult and time consuming it could be to make that vital breakthrough into the industry. Finding a newspaper or magazine with a vacancy in those pre-website days required patience and persistence. And that was just the start.

Then came the nerve-wracking interview, perhaps submitting a test piece and then the anxious wait for a letter or telephone call summons.

Well none of that applied for Ken Rogers who was catapulted from football fan to football writer almost overnight. Ken attended his first match at Goodison at the age of 18 months and quickly became an Everton fanatic.

He demonstrated this devotion in later years by regularly aiming chants of hatred from the Goodison Park terraces at Bill Shankly, manager of rivals Liverpool. It took Ken little more than weeks to move from terrace terror to apprentice journalist on a local Merseyside weekly newspaper – and he was soon interviewing the same Bill Shankly.

Ken’s rocket launch into sports journalism quickly hit a snag. Arriving at Anfield one day he was intercepted by Shankly who objected to a headline in his newspaper, picked him up by the scruff of the neck, ejected him through the exit door and warned him never to return.

Everything was eventually smoothed over and Ken got a huge slice of luck when his boss Alan Parry left for Radio Merseyside. At just 18 he became sports editor of the Liverpool Weekly News.

In a new book he reveals the problems engendered by covering football in a two-club city as well as how he stumbled across some of his exclusives like Everton’s signing of Andy Gray and the departure of Howard Kendall.

Kendall, Colin Harvey, Brian Labone and Dave Hickson were counted as personal friends in a city where they labelled football a religion as Everton and Liverpool took turns to experience the highs of trophy winning glory and the lows of shattered expectation.

During his five-decade career 23 managers came and went from the two clubs which meant relationships had to be established and built up each time.

He launched Everton and Liverpool magazines and served on panels that established Halls of Fame for both clubs. His move to the Liverpool Echo left him perfectly placed to assemble a huge vault of anecdotes and inside stories while writing about the Mersey clubs at home and abroad.

Ken has assembled many of them in a book which is part autobiography and part history of Merseyside football. It should be required reading for all aspiring sports journalists and those ready to wallow in nostalgia.

Born Not Manufactured by Ken Rogers is published by Sport Media. Price £14.99.