He was nicknamed “the prince of centre-halves” but has been largely forgotten by the game he once graced. ERIC BROWN reviews a biography of TG Jones, the former Everton and Wales captain. 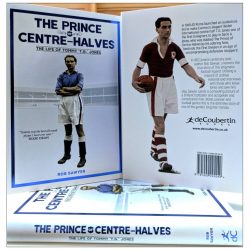 He could have been one of the first foreigners to play in Serie A, was rated above John Charles, won 17 caps for his country and proved a vital link in the Championship-winning side often hailed as his club’s finest.

Yet the game has almost forgotten TG Jones who virtually invented the role of ball-playing centre-half. Like many other players of his generation Jones lost his best years to the war and saw the great title winning Everton side of 1938/9 he inspired fall apart when football resumed seven years later.

Dixie Dean described Jones as “the best all round player I have seen – neater even than John Charles”.

Thomas George Ronald Jones was born in October 1917, one of five siblings, and turned out for local club Connor’s Quay after graduating through school and youth teams. Soon spotted by Wrexham he made only six Football League appearances before moving to Everton in time for the 1936-37 season on wages of £5 a week plus a £1 bonus if selected for the first team.

At that time Jones’ role as centre half was to play between the wing halves, collecting the ball from defenders and distributing it to the forwards. The stylish and accomplished way he did so soon began to attract attention. When it became fashionable in the English game for the centre half to move back between the full backs and play as a defender his skills shone like a beacon.

Most clubs employed towering lumps charged with belting the ball as far and as fast as they could for this role. TG simply carried on doing things his way, practically inventing the ball playing centre half role which did not become fashionable in England for many years.

How many like Jones have graced English football since ? Well, there’s Bobby Moore, Rio Ferdinand and perhaps, at a squeeze, Colin Todd. Difficult to recall any others who have made it at the top although John Stones may do so if he’s left to play his own game.

Perhaps Jones’ game was more suited to the continent. No wonder then that AS Roma asked Everton to name their price for him in 1948 – a decade before his countryman Charles finally made his pioneering move to Juventus. Everton showed interest, the board dallied and eventually Roma lost interest.

How many like Jones have graced English football since? Well, there’s Bobby Moore, Rio Ferdinand and perhaps, at a squeeze, Colin Todd. Difficult to recall any others who have made it at the top although John Stones may do so if he’s left to play his own game.

Devastated Jones blamed Everton’s directors and his relationship with the club fractured forever. He became disillusioned at Goodison. Eventually Tom Jones decided the grass of home was indeed greener in Wales and decided to go into non-League football there. This was not so sensational as it would be today.

In the Football League players were restricted to a maximum wage below £20 a week but in non-League they could pick up decent football wages and still benefit from another career. Jones signed for Pwllheli, took over a hotel in the town and claimed he was earning more than he had at Goodison.

After six years he joined Bangor City, eventually becoming manager. With his contacts Jones signed many former Football League players and built up Bangor into a formidable outfit. He guided Bangor to a Welsh Cup win which brought a first taste of European football to the club.

Drawn against Napoli, Bangor grabbed national attention by beating the Italians 2-0 in the home first leg with the return won by Napoli 3-1. With aggregate scores level (no away goals rule then) a third meeting took place at Highbury where Napoli squeezed to a late win.

Sadly Jones’s managerial career never reached such dizzy heights again. Eventually he settled back into obscurity as a manager – of a North Wales newsagent’s shop.

The prince of centre halves died in Bangor in January 2004. Also compared with Pirlo or Beckenbauer by those old enough to remember, Jones would have been a sensation if he played today.

But his deeds of the pre-television era have been allowed to fade and dim. We must be grateful that Rob Sawyer, who also wrote an excellent biography of former Everton boss Harry Catterick, has turned up the spotlight on this “forgotten” captain of Everton and Wales once again in his centenary year.

The Prince of centre-halves –  The Life of  Tommy  TG Jones by Rob Sawyer is published by deCoubertin Books. Price £15.99.