The Premier League may not be big enough for both of them, let alone a single city.  ERIC BROWN reviews a book charting the deep and at times bitter rivalry between Pep Guardiola and Jose Mourinho, as their Spanish clubs met four times in 18 days. 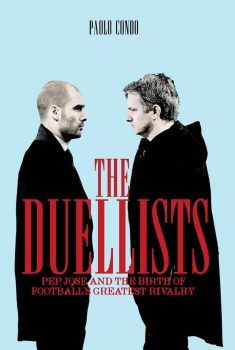 It is perhaps the greatest rivalry in European football history.

Real Madrid v Barcelona probably pips anything else in the “grudge fixture” category including even the spiciest Premier League collisions.

So when these Spanish foes were scheduled to meet four times in 18 days in 2011 sparks were expected to fly. Not only was there natural antipathy between the clubs but extra edge added by the identities of their coaches.

In the white corner of Madrid stood flamboyant Jose Mourinho, rejected by Barcelona despite a spell there as Bobby Robson’s assistant.  In the opposite corner was the more sedate Pep Guardiola, a former Barca player who quickly proved the choice correct by capturing eight trophies in just two years of Johan Cruyff-inspired football.

Mourinho arrived in Madrid after a treble-winning season with Internazionale and became the first manager to truly disrupt Guardiola’s serene progress.  These two men were polar opposites in character and management style.

Their abrasive rivalry added hugely to the melting pot of one of European football’s most fascinating periods.  Paolo Condo covered every cough and spit of the matches, the press conferences and the off-field controversies during those 18 days for Gazzetta dello Sport.

He recalls the snide comments, and the downright insults flying between the camps as well as the tactical acumen behind the titanic matches which often turned brutal.

Every twist and turn during the four-match series is examined in detail by Condo, now a Sky Italia football pundit and Italian juror for the Ballon d’Or award.

As a story of one of Europe’s greatest rivalries, both on the pitch and in the boardroom, this book will surely go down as a classic.  And the fact that both these larger-than-life characters now find themselves on either side of  the Manchester divide makes it all the more compelling. Duellists indeed!

The Duellists by Paolo Condo is published by deCoubertin Books in paperback.