Jonny Bairstow describes how he coped with a life-changing event to become England’s most prolific test wicketkeeper in an emotional book reviewed by ERIC BROWN. 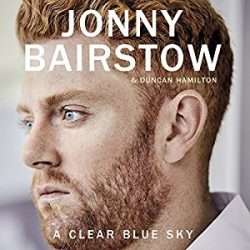 Helen Macdonald hatched a best-selling, award-winning tome called “H is for Hawk” from her experience training a goshawk to help recover from her father’s death.

There’s absolutely no reason why Jonny Bairstow’s “A Clear Blue Sky” shouldn’t follow her lead. No goshawks feature in Jonny’s book. However it does chronicle how he coped with the shock death of his father David at the age of 46.

Those expecting dramatic insights into the life of Jonny Bairstow will be disappointed. His book deals almost exclusively with the repercussions from that day in 1998 when his world turned upside down and he makes no apology for offering it as a tribute to his much-missed father.

Jonny Bairstow was just eight years old when his father took his own life in January 1998. He can’t explain why his father should have taken this drastic action, especially knowing that both he and his sister Becky would be likely to be first through the door of his Yorkshire home to find him.

As indeed they were. Jonny had been taken by his mother Janet to football training with Leeds United and seven-year- old sister Becky, known as Boo, went along for the ride. Bounding away from their mother they hurtled through the door to discover their father hanging from the staircase.

Jonny’s memory of what happened next is mercifully blurred. He remembers only that the devastated family went to a neighbour’s house before being cared for by grandparents.

Naturally they agonised over what could have led David to take such a step especially as he had booked a celebratory meal for Janet’s 42nd birthday the following day. It emerged that he had been depressed over car crash injuries to his right arm threatening to end his local cricket and golf.

A drink-drive court case related to the accident hung over his head. And he was convinced Janet might die after being diagnosed with cancer.

Jonny has told himself it was a cry for help never intended to go as far as it did. But instead of arriving home half an hour earlier as scheduled Janet, Jonny and Becky were delayed.

The coroner recorded an open verdict after admitting David Bairstow was the only one who really knew the truth. His shadow looms large over the book with Jonny admitting he thinks of his father almost every minute of every day.

He was in the forefront of his mind when Jonny finally completed a memorablefirst century for England against South Africa at Newlands after becoming becalmed in the nineties for 40 agonising minutes.

At last he picked up his two-pound nine-ounce bat, cut a short ball from Stiaan van Zyl past backward point and ripped the helmet from his ginger head to celebrate. The memories came flooding in.his mother, sister, grandparents and of course his father.

Jonny admits almost losing the battle against tears pricking the back of his eyes but somehow held it together as batting partner Ben Stokes approached with instructions to “take it all in mate.” He looked back at the blue sky hoping that if heaven has a pub his dad is in it now ordering a celebration pint.

Jonny reveals a little about his struggle to convince England selectors of his Test qualities as both batsman and wicketkeeper. Yet his abundant runs and ever more acrobatic catches speak for themselves as he surpassed his father’s international exploits.

‘This is an emotional read to be perused through misty eyes. Award-winning author Duncan Hamilton has effectively assisted Jonny in piecing together one of cricket’s saddest stories yet with a happy ending’

He was the 87th player to make his England debut at Lord’s and the 13th to follow his father into the England team. Sadly the only difference between Jonny and the rest is that he was the only one whose father was not there for the occasion.

This is an emotional read to be perused through misty eyes. Award-winning author Duncan Hamilton has effectively assisted Jonny in piecing together one of cricket’s saddest stories yet with a happy ending.

Surprisingly the book includes a couple of howlers. The great Mike Procter is spelled Mike Proctor and on page 219 is the bold but inaccurate assertion that “England have never had a left armer who’s taken 100 Test wickets.” How about Derek Underwood (297), Tony Lock (174) and Phil Edmonds (125).

Still, only an extraordinary rival will prevent it becoming the sports book of the year.

A Clear Blue Sky by Jonny Bairstow and Duncan Hamilton is published by HarperCollins. Price £20.00 hardback.