A new book on a globe-trotting English coach with more stamps on his passport than the late Alan Whicker is reviewed by ERIC BROWN. 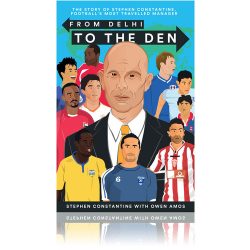 He has managed more national teams than any other Englishmen yet few would recognise his name. Stephen Constantine has worked in Asia, America, Africa and Europe, heard 10,000 fans sing his name in Calcutta and been hugged by a pitch-invading Prince in Kathmandu.

Here he remains largely an anonymous figure from a bottomless pit of backroom men so essential to the health of football.

London-born Constantine surely has one of the most colourful CVs in football. He had trials for Millwall as a goalkeeper and Chelsea as a midfielder. He scored a hat-trick for Chelsea and sobbed when six weeks later they told him he didn’t meet their standards.

He went to live with his father in Cyprus, pushing heavy wheelbarrows around building sites. He also worked as a hotel doorman and a lifeguard while playing for Cypriot club AEL, and on a short return trip to England got a job in a furniture factory. By the time he was 20 Constantine moved country for the seventh time when he joined his brother in New York.

There he pumped gas at a La Guardia petrol station, sold flowers in Brooklyn, hawked watches in Spanish Harlem, worked for a firm installing kitchens and learned how to cut and polish diamonds. Constantine was a hustler. He even sprayed white flowers green to improve St Patrick’s Day sales!

‘There he pumped gas at a La Guardia petrol station, sold flowers in Brooklyn, hawked watches in Spanish Harlem, worked for a firm installing kitchens and learned how to cut and polish diamonds. Constantine was a hustler. He even sprayed white flowers green to improve St Patrick’s Day sales’

Eventually he got into college football, established solid contacts and started to build a soccer career, combining matches for minor teams in America and Cyprus with yet another job selling car phones  and stereos. A serious knee injury ended his playing career but steered him towards coaching.

Frustrated by English insistence on paper qualifications, he slowly built a reputation over seven years coaching in the Cyprus lower divisions. Someone must have been checking his progress as Constantine got an invitation to manage Mongolia, which he turned down, before accepting the job of coaching Nepal’s national team in 1999. During a match between Nepal FA staff and the royal family staff Constantine scored a goal celebrated by ritual goat-slaughtering on the touchline.

His crazy adventures continued through later spells in charge of Sudan, Malawi, Rwanda and India (twice).While managing Malawi, Constantine drove into the country and, feeling peckish, stopped to ask about cooked meat on sticks offered by boys at the roadside. He was told they were bush rats “because they are fatter and tastier than town rats.” He wasn’t tempted to judge.

Constantine enjoyed mixed success coaching. He didn’t win a game in Sudan, was relegated in Cyprus and achieved the same feat during a year at Millwall. But in Nepal and India he is a national hero who immeasurably raised playing standards.

BBC journalist Owen Amos has pieced together a gripping tale of triumph over adversity which should be required reading for all coaches and for anyone who doubts something can be achieved out of nothing.

From Delhi to the Den by Stephen Constantine is published by deCoubertin Books £12.99.