On a ground-breaking day for women’s cricket PHILIP BARKER was at Lord’s to witness at first hand just how far the sport has come and, perhaps, to shed a tear that pioneer Dame Rachael Heyhoe Flint was not there to see it.

It’s only July, but I already know who I’ll be voting for when it comes to our SJA team of the year this winter after England’s women won the Cricket World Cup at Lord’s in front of a sell-out crowd. There is a bit of history. On the last two occasions they won the the World Cup in 1993  (pictured above) and 2009, they also carried off the SJA Award.

For the final, the big hitters of cricket journalism included Test Match Special supremo Adam Mountford, SJA cricket writer of the year Michael Atherton, Vic Marks, Scyld Berry and even Wisden Cricketers’ Almanack editor Lawrence Booth. Organisers claimed a 50/50 gender split in the crowd. It was getting there in the media centre too, with Cricinfo’s Jared Kimber alongside Melinda Farrell, Martha Kelner enjoying her new beat with The Guardian, and Raf Nicholson, who masterminds the website CricketHer. There was also a sizeable female contingent from India.

Alison Mitchell, our 2013 SJA Broadcaster of the Year was on air for the Beeb at the moment England seized victory and was also MC for the presentation ceremonies. The words “game changer” have been bandied about a lot in the last few weeks that this might do for women’s cricket what the 2012 Olympics did for women’s sport in general. 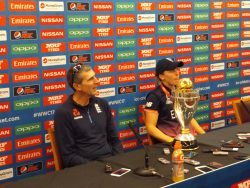 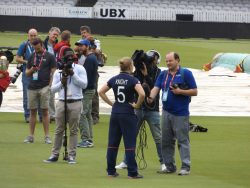 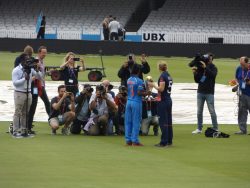 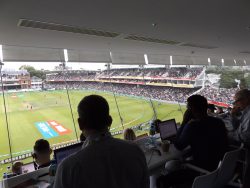 Talking of game changers, India were 191 for 3 chasing 229 for victory when Anya Shrubsole claimed her first victim of her final spell, laughingly admitting afterwards that skipper Heather Knight had been about to take her off. When she had finished the ultimate demonstration of  death bowling her figures were 6 for 46, India’s batting was in tatters and England were celebrating.

It was even more devastating than that Stuart Broad Ashes spell at Trent Bridge two years ago. I’m inclined to go back further to Ian Botham 1981 vintage at Edgbaston.  In true Beefy style, Shrubsole simply demanded the ball and backed it up with deeds and a nice line of humour in the mixed zone. There were press officers around for all teams, but phrases like “taking the positives” were mercifully few.

To their credit Sky Sports threw the kitchen sink at their coverage. It was on the same level as their peerless coverage of  Test cricket. For the final there was even the controversial spider cam

There probably has never been a day quite like it at Lord’s. Organisers said under 16s made up almost a third of the crowd. In fact there were rather a lot of under tens too, all anxious to feature on the Sky Sports’ coverage. Many were still having their faces painted when aerialist acrobat Robyn Simpson arrived on a trapeze suspended from a giant cricket ball with the trophy.

To their credit Sky Sports threw the kitchen sink at their coverage. It was on the same level as their peerless coverage of Test cricket. For the final there was even the controversial spider cam.

Matches were streamed around the world, bite size chunks available on the internet. The International Cricket Council claimed unprecedented media coverage and a global reach of over 50 million. In Britain alone, audiences were up 50 per cent on the last tournament in 2013.

The tournament lasted a month, all but a day. Those working with the media at four regional centres Taunton, Bristol, Derby and Leicester were unfailingly helpful and well organised, though we were thankful for the press box stats gurus confirming the score. At Grace Road, a floodlight pylon obscured one scoreboard, and you had to peer through scaffolding to see the other.

The volunteers or Cricketeers all knew their cricket, a welcome change from some events. Over 600 of these were women too. England enjoyed plenty of coverage in the national press, and Anya Shrubsole’s guide to her team mates dominated the centre spread of The Times Sport on Saturday.

Apparently skipper Heather Knight is the biggest practical joker in the team though not as we learnt, a devotee of the ITV craze Love Island which apparently was the viewing of choice for the rest of the squad.

It was such a far cry from 1973 when the late Dame Rachael Heyhoe Flint (left), who died in January, did her utmost to promote the first competition in the pages of The Cricketer magazine and in national newspapers. She persuaded fellow Wolves fan and multi-millionaire Sir Jack Hayward to bankroll the entire tournament to the princely sum of £40,000.

It helped that Rachael was a journalist and PR specialist, but there was no live television and radio commentary and although the players were permitted to practice in the nets, there were no matches at Lord’s.

Later that year, a match against the England veteran men, including Denis Compton and Len Hutton, attracted almost as much publicity. Lizzie Ammon’s retrospective of the Women’s World Cup in The Times would have delighted Rachael. They gave bats bearing her name to the under 16s and there was a minute’s applause in her memory.

As England captain Knight put it: “I actually felt quite emotional when I saw Rachael’s face on the screen. She paved the way for all this.”