Mention Peter Reid and most football fanatics who are not Everton followers will recall first his laboured pursuit of a dark-haired, blue-shirted chunky little figure with wings on his heels which was doomed to failure from the start.

Reid never got close to interrupting the serene progress of Maradona who sped away from him and within nine seconds had wriggled snake-like past three defenders to bag a second goal for Argentina and knock England out of the 1986 World Cup.

Sir Alex Ferguson allowed his Scottish bias to shine through in the foreword to Reid’s new autobiography when he wrote: “It’s one of my favourite memories of Peter Reid. It was like watching an old racehorse chasing Frankel.”

Reid himself admits he was left at the starting gate as Maradona raced upfield to claim one of the greatest World Cup goals.  “It was like a kid chasing his Dad in the garden. For every yard I ran he ran a yard and a half with the ball at his feet. I couldn’t even get near enough to foul him.’

This defining goal in England’s World Cup history still has a profound effect on Reid. “In my dreams I’m still running but there’s a wind against me,” he says. “No matter how hard I try I can’t get there. A psychiatrist might have a field day with that but I know three decades on it’s because I’m still incredibly disappointed I couldn’t lay a glove on him.”

Reid pulls no punches when it comes to Maradona’s “hand of God” goal that preceded his brilliant slalom for the second. “Cheat is a strong word to use in football but Diego Armando Maradona is a cheat.  The referee was caught out by a cheat.”

The 1986 World Cup should have been a peak of Reid’s career but instead he was left to reflect on two Championship medals, an FA Cup medal and a Cup winners’ cup medal with Everton plus two promotions as Sunderland manager.

The no-nonsense, tough tackling midfielder has little time for players who try to con the referee. “I can’t identify with the way the game has gone with players going down at the slightest touch.  It’s not the game I grew up playing. They are cheating.” 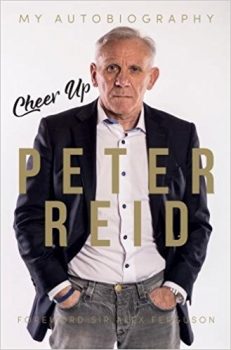 His life story is peppered with anecdotes like the one from Everton’s most famous night in April 1985 when they battered Bayern Munich into Cup-Winners’ Cup submission. No Evertonian, myself included, will ever forget Reid and the team he judges Everton’s best overwhelming highl- rated Bayern with a performance of power, desire and determination.

At one point Reid suffered a late tackle from Hans Pflugler that left him with a gashed calf and blood seeping through his sock.  “You English pig,” shouted Pflugler over his shoulder as he ran away.

Reid decided to have his revenge. When later he saw the German approaching out of the corner of his eye he did just that. “Have some of that you Nazi bastard,” yelled Reid as his opponent writhed on the ground.

“But I’m Danish,” came the reply. Reid had got Soren Lerby instead of his intended target.

Reid’s football career was all about winning battles, against injuries as well as opponents. Mostly,  he won. He never backed away from a tackle or a challenge. Well maybe just once.

When left with baby daughter Louise for the first time he couldn’t face changing her nappy.

Peter Reid, one of English football’s hardest men, ran like a frightened rabbit to get a neighbour to do the job!