Christmas special. PHILIP BARKER delves into the archives and re-tells the story of one of football’s great comebacks.

Sixty years ago this week in South London, Charlton Athletic pulled back a four-goal deficit in the last 28 minutes to beat Huddersfield 7-6. 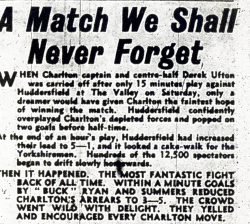 It was also revenge for the opening day of the season when Charlton managed to squander a three-goal lead against the same opponents.

Back to the 13-goal bonanza. In the days before substitutes, Charlton played 75 minutes with ten men after skipper Derek Ufton dislocated his shoulder.

Had it happened today, the injury would have been analysed in super slow mo, goals endlessly replayed on SkySports, BT Sport or the Beeb, and phone-ins and social media would have been in meltdown.

Yet in 1957 it was not on TV and Charlton’s tour de force took everyone by surprise.

In the early days of televised football there was no Match of the Day. Instead Sports Special transmitted at ten on Saturday nights.

“I was assigned to cover the game between Charlton and Huddersfield,” recalled commentator Kenneth Wolstenholme.

“At the last moment Paul Fox (producer) changed his mind because he couldn’t see that match being all that exciting. When I got to the studio, Fox told me the story.

“The match which was supposed to be of no interest turned out to be the most thrilling, most amazing, in fact one of the most unbelievable games in the history of the Football League. What a game to miss!”

The attendance for this pre-Christmas match in the old Division Two was 12,500, but many streamed away from the ground when Huddersfield were 5-1 up, so not even that number witnessed the dramatic finale. 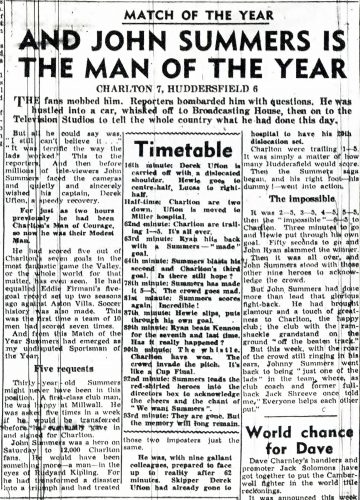 The Beeb did at least despatch a fast car to whisk the hero Summers to their London studios. “I still can’t believe it,” he told  viewers. “It was terrific the way the lads worked.”

If the match took BBC Sport by surprise, the same was true for most national newspapers who included reaction only in round-ups. In the Monday morning edition of the Daily Telegraph though, Frank Coles went to town.

“Charlton, for so often the poor relations of London’s soccer clubs, are this morning the most famous team in England,” he wrote.

The Daily Mail had quotes from Huddersfield’s manager, none other than Bill Shankly. “It couldn’t happen again in a lifetime,” he said.

“I can’t remember anything like it and I’ve been in football since 1919,” Charlton boss Jimmy Trotter said.

None of the newspapers printed pictures, although some were taken. One greets visitors to the Valley to this day, just along from the statue of legendary goalkeeper Sam Bartram, who had retired the previous year.

Most match reports did not have a by-line but the Evening Standard did identify their man. Harold Palmer filed his copy for the final edition with ten-man Charlton two goals down.

“After being well on top, Charlton fell away and were soon in arrears,” wrote Palmer.

The dramatic recovery happened long before anyone read Palmer’s story in print. He might have been happy to have remained anonymous.

The Sheffield Star football special did at least have the full story. So did the Huddersfield Daily Examiner. It must have been a long journey home for their man. He wrote “Town created football history…for Town it will be regarded as their most successful failure. Plucky Charlton but oh so lucky!”

A masterpiece of searching for the positives – six goals but still a defeat. 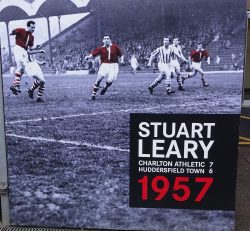 As Norman Giller observed on this site a few years ago: ‘No press man had the courage to tell Shanks it was the first time.”

The Mercury cast Summers as their man of courage, now he was their modest man.”

The Kentish Independent had a reader’s letter from a Mr W Bartlett of Plumstead, who described himself as “overjoyed to see the grandest fighting finish of all time”.

The local papers went to press six days later by which time Charlton had played two more matches, which explains why they were less expansive. Charlton drew 0-0 with Doncaster on Christmas day, then after a quick meal in a London hotel, a train to Doncaster and a 2-1 victory on Boxing Day.

By a curious twist, Huddersfield had an opportunity for revenge in the FA Cup. “With ground advantage we must start favourites,” said Shankly with the unshakeable self confidence later so familiar  at Liverpool.

Huddersfield’s teenage prodigy Denis Law missed the drama at the Valley through injury but he recovered to play in the Cup and scored. Almost inevitably, so did Summers. The first tie was a 2-2 draw. Charlton won the replay. It was the third meeting of the sides in less than three weeks.

There was a tragic postscript to the story of Johnny Summers. Within five years he had died of cancer.

Entries for the British Sports Journalism Awards close on January 17th. For further details and how to buy tickets, click HERE