It’s amazing  that Bruce Grobbelaar’s autobiography can be condensed into fewer than 300 pages, writes ERIC BROWN.

His experiences on the pitch were spread over 12 clubs in three countries and included two of football’s greatest tragedies. Then there’s his war service and a long-running court case that eventually led him to bankruptcy and divorce. 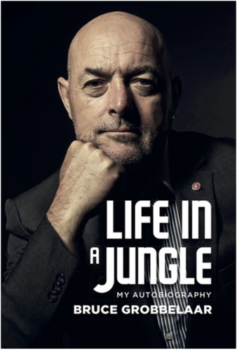 Co-author Ragnhild Lund Ansnes, who wrote three books about Liverpool FC, has made a fine job of squeezing it all into a gripping account of the life and times of Liverpool goalkeeper Grobbelaar.

South African born Grobbelaar was brought up in Zimbabwe and served in the Rhodesian bush war before moving to join Canadian club Vancouver Whitecaps. A loan switch to Crewe then permanent move to Liverpool launched him towards becoming one of the best known goalkeepers in the UK. Bob Paisley signed Grobbelaar to replace Ray Clemence and in nearly 15 seasons at Anfield he won 19 medals.

To Liverpool fans Grobbelaar will always be remembered for his “spaghetti legs” performance which destroyed the concentration of Roma players during a European Cup Final shoot-out. To Everton fans the often eccentric Grobbelaar will be remembered as the keeper beaten by Graeme Sharp’s volleyed long range goal of the decade contender and Kevin Ratcliffe’s bobbly “scudder” in Merseyside derbies.

Unfortunately he will be more widely recalled as the man wrongly accused of chucking Liverpool matches, which forced him into extra time in the law courts to clear his name.

Grobbelaar is at his most poignant when offering the most significant thoughts yet of any Liverpool player directly involved in the Heysel and Hillsborough disasters.

Grobbelaar, now 60,  rebuilt his football career coaching in Canada but has recently returned to England where he still tries to banish the last lingering suspicions surrounding his name.

Some players struggle to fill much more than a single chapter of genuinely interesting autobiographical material. Grobbelaar’s tale falls in the unputdownable category from beginning to end.

Life in a Jungle by Bruce Grobbelaar is published by deCoubertin Books. Price £20 hardback.