Doug Ellis remains a controversial figure at Aston Villa where many fans and former players still blame him for the decline of the club.

Sir Doug, who died in October carried the can for Villa plunging towards Division Two just five years after being crowned kings of Europe.

But Ellis is vigorously defended in a new book which focuses on Villa’s rise from Division Two in 1975, their title winning and European Cup glory and subsequent slide back into the second tier during a turbulent time for one of England’s biggest clubs.

Ellis fell victim to a boardroom coup and missed the spell which brought Villa twin trophies. When he bought himself back into the club it started to slide.

Author Richard Sydenham argues this was not completely the fault of Ellis who loved Villa dearly and probably saved the club from an even worse fate. 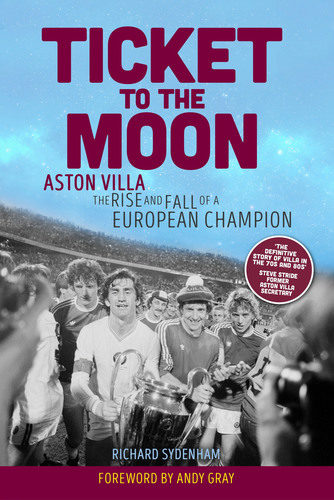 During his absence from Villa Park, Ellis was persuaded to join ailing Wolves, quickly recognised their financial problems and promptly placed the club in receivership. He claimed this action may have  prevented Wolves from going out of business altogether.

On returning to Villa, Ellis applied careful husbandry to ensure his beloved club avoided the dangerous path trodden by Wolves. He adopted a “one in, one out” philosophy over transfers in a bid to ensure Villa were never overstretched financially.

Ellis found the European Champions had made a £546,173 increase in profit due to European football and also banked a £450,000 insurance payout for crocked Brian Little. Yet profits were down from the previous year by £3,673. Clearly action was needed and players involved in the European Cup triumph began to leave.

The decline continued when European Cup winning boss Tony Barton was sacked. Ron Atkinson, Keith Burkinshaw, David Pleat, Gordon Lee, John Toshack and Lawrie McMenemy all turned down a job by then seen as a hot potato. Eventually Villa went for Graham Turner of Shrewsbury on a two year deal.

Turner admits in the book that a leap from Shrewsbury to Villa left him out of his depth. Given the “show us your medals” mentality in English football, Turner struggled to command respect from Football League and European Cup winning players, some of them only a couple of years younger than he was.

Ellis, always with an eye on the balance sheet, encouraged sales of Peter Withe and Dennis Mortimer before their transfer values dropped to insignificant sums because of age.

The author, formerly of Reuters, The Daily Star Sunday and the Sunday Telegraph, gained remarkable access to leading Villa figures like Ellis, secretary Steve Stride, Turner, the family of former managers Ron Saunders and Tony Barton, leading players of the era and even club minutes to unearth what really went on at Villa Park during this period.

He exposed some muddled boardroom thinking with payouts to departing players. Midfielder Alan Curbishley received an ex-gratia payment of £30,000 before joining Charlton Athletic while Des Bremner, a league and European Cup winner, received £17,500 and Ken McNaught £25,000.

Richard Sydenham’s meticulous research has contributed enormously to a gripping for all football fans.

Ticket to the Moon (The rise and Fall of a European Champion) by Richard Sydenham is published by deCoubertin Books. Price £18.99.