England and penalties. We have history, as a new book on the national team reveals. ERIC BROWN reports.

The year was 1899 and a quarter of the world still belonged to Britain in an Empire stretching from Cardiff to Calcutta.

It was the year headmaster Gilbert Oswald Smith wrote his name into football’s history books with a pioneering act which caused tears to flow when repeated nearly a century later.

Smith played for the famous Corinthians club regarded as guardians of amateur football. They disdained the FA Cup and league football because it might mean facing professional players while they sometimes allowed opponents to score unopposed by a goalkeeper from penalties awarded against them.

And it was from the penalty spot that G O, as he was known, attained his place in the game’s records. Smith made his England debut against Ireland in February 1893. His ability as an efficient passer of the ball plus his knack of throwing defenders off-guard established him in the side within a year. 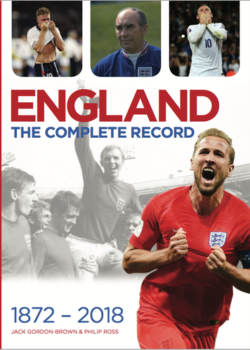 When England faced Ireland in a British Home International clash at Sunderland on 18 February 1899 they were awarded their first penalty and, as captain, G O stepped up to take it.

England’s uncomfortable relationship with the penalty kick was born as Smith missed. It didn’t matter much in terms of the match: England won 13-2 and Smith scored four.

It wasn’t until the 2018 World Cup in Russia that England finally laid the ghost of  G O Smith with a shootout win over Colombia.

These penalty woes  are charted in full in a new book on England crammed with statistical information. It contains team line-ups, results, dates and attendances  for every England match from the 1870’s to the World Cup exploits of 2018 with a written summary on each year.

There are lists of England World Cup and European Championship squads, goalscorers, captains, goalkeeper clean sheets and profiles of England managers. There’s a section on the England women’s team, too.

Authors Philip Ross and Jack Gordon Brown have collaborated to produce the most comprehensive, up-to-date history of English international football.