Every sports desk worthy of the name has, by now, found room for the 50th anniversary edition of the Football Yearbook. Around 1,000 pages of everything you want to know about the beautiful game, contained within that famous blue cover.

To many it will always be ‘Rothmans’ even though Sky Sports took it on for years. This year is the second edition in association with The Sun. ‘Rothmans’ first came out in 1970 at a cost of 18 shillings. It may come as a surprise to discover that The Sun also produced a football annual that year. 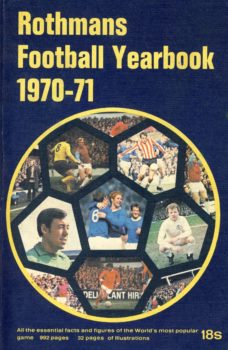 The paper had just been taken over by Rupert Murdoch and football coverage was important to boost circulation. The Sun had a secret weapon designed to have kids pestering their parents to switch to the newcomer – the football sticker.

Half a century ago, The Sun had the market to themselves (Panini were strictly continental in the early 1970s).

Backed by a strident tv ad campaign, there was a soccer chart by The Sun in 1969-70, a Mexico 70 World Cup chart. Then in August 1970 came the launch of The Sun Football Scrapbook and Encyclopaedia. More than a million were printed and each one cost ten pence (or two bob as it was known then) for 161 pages.

“Within these covers you’ll find the most complete and most exciting souvenir of the 1971 football season,” it trumpeted. 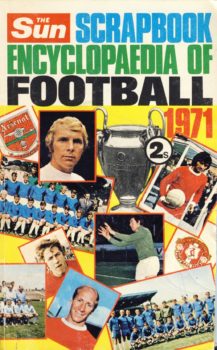 Sun sports editor Frank Nicklin reflected on “the year of the cliffhangers. Enough hair-raising finals and finales for a dozen fiction books, except that this was all for real.”

Though Everton won the league at a canter, Chelsea won the FA Cup only after a replay, amazingly scheduled for the same day as a European final. Hard to see the tv paymasters permitting such an oversight today.

In Scotland, there was nothing unusual in Celtic winning the title but they also reached the European Cup final after an epic semi against Leeds. The other big winners would strike a chord today, though there was only a ‘double’ for Manchester City – The League Cup and what remains the European Cup Winners’ Cup.

There were league tables, results, fixtures and a do-it-yourself scoresheet and records. The blurb on the covers promised “argument settling facts by the thousand.”

Colour television was by now beaming international matches into British living rooms leaving soccer writer Bob Driscoll to muse: “No longer are we the inward-looking bunch who treated foreign clubs with a mixture of sympathy and derision. If you had sung the praises of Ajax to a British soccer fan of the 1950s he would assume you had developed an obsession for sink cleaners. Mention the same word to today’s terrace aficionados and he will immediately begin a knowledgeable run down of the skills of Johan Cruyff.”

There was a Rothmans-esque club directory but only for the top three divisions in England with club crest, statistics and a couple of pars of history including the gem that Bury held the record for the highest victory in a cup final.

It was in these pages that The Sun’s football swap cards came into their own. Readers were told: “In the blank spaces you mount colour pictures, star players, teams and captains. You obtain the pictures with coupons which appear in The Sun every day.” 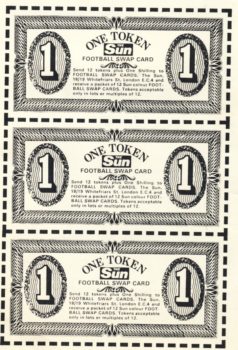 Twelve tokens were needed for a packet of 12 cards. With 134 to collect, you had to buy the paper every day for more than two months, even without the inevitable duplicates.

Presumably there were a lucky few who did complete the collection. The reward for the first hundred to do so was a free football.

It was all a bit like Willie Wonka but it seemed to do wonders for circulation. You can just imagine the meetings at the ‘Super soaraway’s’ (how The Sun was marketed in those days) promotions department, tucked away in Bouverie Street, just off Fleet Street.

The following year they repeated the exercise, but this time offered “soccer stamps, designed exclusively for football fans by the same famous firm that prints real stamps for over 100 countries in the world.”

There were sections on trophies, soccer fashions, great goalkeepers, international superstars, just about everything.

They even upped the prize for a completed book. This time it was a trip to Disneyland. The gimmick the year after “amazing 3-D wonder cards, photos that leap to life when you tilt them.”

All this and not a computer game in sight.