Another year, another Nationwide Football Annual, reviewed by ERIC BROWN

Now the football season can really start. That one missing item to go along with the new season’s replica shirt, the ever higher priced season ticket and the dreams of silverware has finally surfaced. 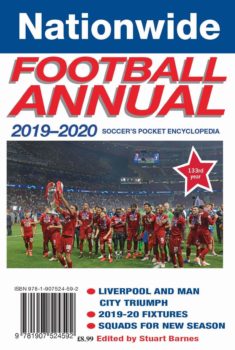 No prizes for guessing the content of the front cover picture: it’s Liverpool celebrating their European Cup triumph despite failing to ever win the Premier League. You can check who has in one of the many fact tables inside.

There’s more emphasis on women’s football this year and editor Stuart Barnes tells me the text has undergone a microscopic examination with any errors located and eliminated.

In his introduction Barnes comments on peak viewing figures for the women’s world cup of 11.7million on the BBC which proves it is ready for a move into mainstream sport. England didn’t bring home the trophy but qualified for the 2020 Tokyo Olympics when the sport is expected to take another major stride forward.

Barnes predicts another toe-to-toe battle between Manchester City and Liverpool for a Premier League enlivened by Frank Lampard’s arrival as Chelsea manager.

Of course for many it will be a season of heartbreak. Almost before the ink was dry on the annual’s pages Huddersfield became the first League club to sack their manager. Life expectancy for Championship club managers is little more than a butterfly’s.

The annual is one of life’s staples though with its mixture of facts and feats from the past in England, Scotland, Ireland and Wales as well as pages of records ideal for the pub quiz, reports on every club’s season and fixtures. It’s a heady mix.