He was born illegitimate in a Manchester slum and never knew his father. His mother and aunt worked in a family laundry business by day and at night went out to work as prostitutes.

He left school aged 13 having never sat an examination and established an odd-looking CV by working as pavement artist, carpenter’s dogsbody, a messenger running errands, an assistant boiling type in a printer’s shop, a theatre confectionery salesman and a salesman for an insurance company where in Dickensian fashion he sat on a high stool from 9.30-5.0 writing documents in copperplate for seven years. 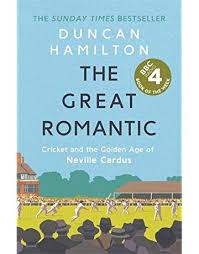 During those years he frequently went AWOL to read as many books as he could in Manchester’s municipal libraries. From this chaotic start in life emerged Neville Cardus, the self-made writer who left behind childhood poverty and his original name to hobnob with stars of sport and music and received a knighthood. He even received flowers from the Australian Prime Minister when taken ill there.

Cardus, born John Frederick, wrote to the editor of the Manchester Guardian in 1917 asking for a job in the proofreading or general department as he thought the newsroom would be out of reach.  He was taken on as a gofer and required to work so hard he suffered a breakdown.

After recuperating, Cardus returned and was assigned to lighter duties in the newsroom – only to be sacked.  Yet he was re-employed,  an opportunity to cover cricket arose and the great adventure began.

Cardus, adopting his new name, revolutionised cricket writing. Previously reports were presented in dull, chronological fashion starting with the toss and progressing with the opening bowlers taking on opening batsmen and so on to the end of a day’s play. The whole thing was written like an accountant’s summary with huge emphasis on statistics and other figures.

Cricket writers wrote about “the custodian of the gauntlets” and the ball “skimming along the greensward” but there was little effort to bring out players’ characteristics. Cardus changed all that.

He would describe in detail a wicketkeeper’s handlebar moustache, a bowler whose arms revolved like the sails of a windmill in delivery stride or a batsman who nervously tugged at his cap before each ball.

It mattered little to him if a batsman scored a century, he would virtually ignore that while writing 10 paragraphs on a single excellent shot that impressed him.

Cardus’ word pictures might include the clouds over a ground, smoke rising from a  nearby factory chimney or the colour of distant hills. The Manchester Guardian took a huge risk allowing Cardus free rein but his style caught on with a newspaper reading public starved of televised cricket who could now visualise their heroes even if they could not attend the match.

Billboards proclaiming “Neville Cardus reports this match” soon guaranteed a circulation spike for the Manchester Guardian. Cardus began to be coveted by other newspapers who offered greater reward. Canny Cardus always left the door ajar when he politely rejected offers by saying “the time is not right for me to move at the moment.”

Cardus continued writing 1,000-word reports by hand throughout his career, suspicious of new-fangled typewriters appearing in press boxes. Anyone rat-tat-tatting on an Underwood during play received dirty looks or worse.

He then showed the letters to his bosses with some careful comment like: “Look at this. They have got a cheek.” His bosses, realising how much more rivals were prepared to pay, always increased the salary of Cardus who had no intention of leaving anyway.

His reputation soared not only in cricket but also among the classical music glitterati who read his concert reviews avidly. He counted the greatest cricketers and the biggest names in music among his friends.

They included Sir Malcolm Sargent and Donald Bradman. Yes, the Australian wizard accused of being aloof and impossible to know turned to Cardus for consolation when his new-born son was dying. He insisted Cardus accompany him to hospital when he received the tragic news that his son may not survive the night.

Cardus continued writing 1,000-word reports by hand throughout his career, suspicious of new-fangled typewriters appearing in press boxes. Anyone rat-tat-tatting on an Underwood during play received dirty looks or worse. Traditionalists relied on messengers taking handwritten reports to the nearest post office where they were telegraphed to newspapers.

This was fine for Cardus whose beautiful copperplate was easily read but occasionally led to panic among rivals. One colleague threw down his pen, passed a 1,200 word handwritten report to a messenger then promptly fell asleep. About an hour later he was shaken awake by the same messenger offering him the report back and saying it could not be sent because no one at the post office could read his writing.

Just like Cardus, it seems I have overwritten with this review.  It is so easy when such a distinguished author as Duncan Hamilton turns his attention to such an interesting life. Duncan’s books on Brian Clough and Jonny Bairstow were classics and this painstakingly researched biography will surely achieve legendary status among cricket literature. It should be read by all aspiring journalists, especially fledgling sports journalists.

The Great Romantic, Cricket and the Golden Age of Neville Cardus by Duncan Hamilton is published by Hodder & Stoughton. Price £20.00

Duncan, a two-time winner of the prestigious William Hill Sports Book of the Year will be discussing his book with multi-award winning sports journalist Patrick Collins (left) at the Henley Literary Festival on Weds, Oct 2 (2.0pm).