Shoot Magazine was launched 50 years ago. PHILIP BARKER unearths his first edition and takes a trip down memory lane

The new football season had just started. Every match kicked off at 3pm on a Saturday. Just like this year, Manchester City and Liverpool were among the goals. In 1969 they both scored four on the first day.

A few days later, on August 16, a new weekly football magazine was launched with a nationwide tv campaign. It cost one shilling (five pence) was aimed at ‘fans of all ages’, and it was called SHOOT!

According to editor David Gregory the word shouted by fervent football fans ever since the first boot struck leather, had an exciting new meaning.

That first edition promised something else, a gift that would always be associated with Shoot. 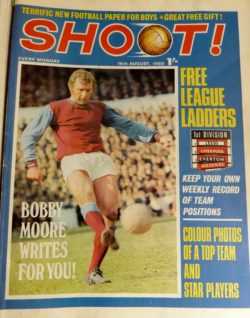 “Presented this week, the full colour six-division chart and the team tabs. You’ll be able to keep your own tables thanks to Shoot,” said the blurb.

“If it was a good idea, I claim it,” said long-time SJA member Chris Davies, who worked for the magazine at that time. “The league ladders were incredibly popular.”

What the ads did not mention was that the tabs had a nasty habit of disappearing into the vacuum cleaner.

“We used to get letters from people asking us to send them replacement Liverpools or whatever,” Davies said.

Something very similar had appeared in Tiger and Valiant a few years before. Perhaps not too surprising.  Both comics were also produced by Fleetway Publications, the company responsible for Shoot. In the early days, the magazine took shape each week at offices in Farringdon Road in central London.

Another idea borrowed from earlier publications was an instructional strip called ‘You are the ref’. This had ever more bizarre scenarios to which London Referees Society chairman Stan Lover provided the answers. The illustrations by Paul Trevillion became collectors’ items.

Each week Shoot had eight pages of colour pictures, unusual for the time. These included a full colour team group. The first was of World Cup holders England at a training session. 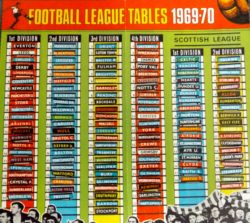 The first player to appear in what became a popular feature called ‘Focus’ was Welsh international Terry Hennessey. Then a Nottingham Forest player, his answers to some rather probing questions included the startling revelations that his favourite food was steak, his biggest drag in football was “players who feign injury” and his favourite singers were Frank Sinatra, Jack Jones and Ella Fitzgerald.

The magazine had its own star columnist. “Bobby Moore writes for you,” said the banner. Bobby reflected on England’s 1969 summer tour. They had drawn in Mexico, beaten Uruguay and led against Brazil before losing to two late goals.

“Pele?” wrote Moore (or at least his ghost writer). “He’s still a great player, but we marked him very closely and I don’t think he’ll give us a lot of trouble if we are drawn against Brazil.”

Months later, when the 1970 World Cup draw was made, England were indeed in the same group. Their encounter in Guadalajara is still revered as a classic and remembered for the save by Gordon Banks from Pele, who later set up the only goal of the match for Jairzinho. 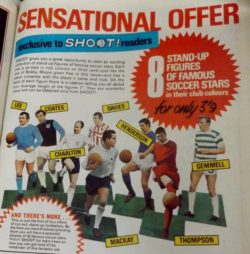 A tribute to ‘Little men, BIG STARS’ highlighted how “Soccer’s tiny terriers cut their opponents down to size.” This recalled how Bolton had told England World Cup hero Alan Ball, “you’re too small to be anything but a jockey.”

Another article suggested ‘Be a Soccer Squirrel’ – hoard your programmes and relive the magic moments of football.

There was a healthy post bag of readers’ letters even in the first issue but the magazine admitted that the first letter page came from young friends of the staff.

“George Best isn’t only the best footballer in Britain, he’s also the most handsome. Could you arrange a footballers’ beauty contest?” asked Beryl, Dawn and Sally from Salford in Lancs.

“Sorry girls, beauty contests aren’t in our line,” was the response.

It struck the only false note in a magazine that over the next thirty odd years provided the first football reading for many young fans.