Manchester City are at Wembley for the FA Cup final this weekend, just as they were 50 years ago. The domestic showpiece is always keenly fought, except that in 1969 the rival television crews did the fighting.

It was the last time that the Cup final was transmitted in black and white. In fact the match was shown on all three channels, but  the only place to see it in colour was BBC 2 which went on air half an hour before to take in the final build-up. 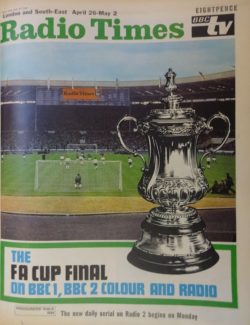 This was the start of the era of fierce competition between the networks in televised sport. David Coleman introduced BBC Cup Final Grandstand at 11.25 am.  Alan Weeks and Frank Bough reported from the hotels of finalists Manchester City and Leicester City.

At midday World of Sport went on the air, introduced by a presenter billed as ‘Richard’ Davies by TV Times. He was later rechristened ‘Dickie’ by ITV head of Sport Jimmy Hill.

He was joined in the studio by Bobby Charlton and Jimmy Greaves. The build-up included wrestling from Brent town hall featuring Les Kellett and Mick McManus with “at the ringside, England soccer star Geoff Hurst”. As it turned out, it was an appropriate warm up.

A single goal midway through the first half from Neil Young was enough to give Manchester City victory. Their captain Tony Book had already been chosen by the football writers as their joint Footballer of the Year (with Dave Mackay.) He received the Cup from Princess Anne and the players paused for the national anthem (played in those days after the match as well). As the lap of honour began, so did the fighting.

“We had an exclusive contract to interview the Manchester City players which was known to all concerned including ITV,” said BBC sports supremo Bryan Cowgill.

“The BBC always wants to buy the rights to everything,” countered Jimmy Hill, who insisted ITV had a non-exclusive contract with both teams.  With the help of Manchester City coach Malcolm Allison, members of the ITV matchday team were disguised in the same light blue tracksuits worn by City substitutes. They emerged from the seats behind the manager’s dug out to start interviewing the winners. 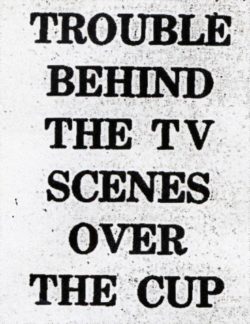 BBC match director Alec Weeks now told his crew: “Move in. Stop those b******s. Use any means possible!  It was a hell of a fight and involved about 40 men. There were more punches thrown than in any Harry Levene promotion.”

Ken Jones of the Daily Mirror was on the receiving end of a punch. In those days he also contributed to Grandstand.

Hill insisted his ITV team were manhandled. Reporter Paul Doherty told The Guardian: “I was shoved in the back, someone tried to pull my mic cord out of its socket whilst somebody else hacked my shins. I was warned about being bullied but I never expected anything like this.”

Floor manager David Yallop lost a tooth in the scuffles. “I am considering suing the BBC,” he said.

“Saturday’s episode represents nothing more than a rather undignified attempt to break the contract which had been given to the BBC,” said Cowgill once the fighting had stopped.

Both sides were summoned to the Football Association headquarters for a dressing down from secretary Denis Follows.

It was a hell of a fight and involved about 40 men. There were more punches thrown than in any Harry Levene promotion

“As the FA proudly makes almost a fetish out of its rigid protocol before the match starts, it should not be averse to trying to inject some sort of order into the aftermath. Otherwise what one lot of tv men dreams up to thwart the others may result in complete chaos,” fulminated World Sports, a monthly with a rather less pressing deadline than live television.

Follows demanded no repetition of what he described as a “shameful exhibition” from the two companies. For its part, Wembley stadium welcomed “a strong lead being taken in this matter by the FA. We don’t want people squabbling in our stadium.”

Whatever happens when Manchester City meet Watford, it seems safe to predict that none of Pep Guardiola’s back room staff will be tv reporters in disguise.