Award-winning photographer Richard Pelham of The Sun has a book out and who better to review it than award-winning pal and colleague TOM JENKINS of The Guardian.

Richard “Dickie” Pelham is The Sun’s chief sports photographer and someone I have known for almost my whole career.  We started out as professionals at almost identical times in the late 80s and our paths have tracked very similar lines, his being at The Sun since the early 90s, me at The Guardian for the same time.

We’ve covered World Cups together, Olympics together, Wimbledons together and Ashes together. It’s great to see that finally a book has been published showing off his tremendous pictures. 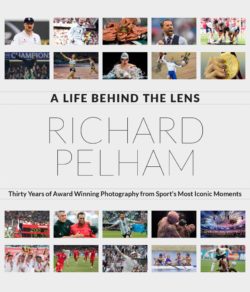 “A Life behind the Lens” is a photographic record of 30 years of work. At 322 pages and hardback it’s a real heavyweight book, packed full of powerful images. It would grace any coffee table as long as it’s sturdy enough.

This book isn’t just about the pictures: throughout Dickie provides a running commentary explaining the meaning behind the images, as well as recalling stories outlining how he achieved them. These are backed up by often humorous tales that have happened along the way.

For instance, there is the time he had a chat with US President George Bush senior by a green at the Ryder Cup, how he turned down Ian Wright’s offer of a drive in the footballer’s Ferrari and how he has still kept to this day a secret that could have scuppered Frank Bruno’s world heavyweight chances. These tales give a fascinating insight into the world of the tabloid sports photographer.

The book is dominated by two sports: football and boxing. Not surprising really given they are the staple diet for The Sun’s sports pages. Not for Dickie are trips to somewhere like Twickenham – as he quite often says to me “I don’t do egg-chasing”.

I probably think his ideal day would be to pop along to the London Stadium to see his beloved Hammers dishing out a mauling (preferably to Spurs), Dickie obviously getting all the bubble-infused celebrations right in front of him, then continuing on to the O2 Arena for an evening of championship boxing. Inevitably he would then take a pinpoint shot of the knockdown punch, timed to perfection, and round it off with the victor displaying the belts straight down his lens.

As Dickie’s book takes us chronologically through his career, there are goals and punches galore. But most of all this book is about winning and what goes with it. There is plenty of evidence to see why Dickie has been crowned “The King of the Cele” by me and other sports photographers: celebrations are his thing.

The publication of the book was delayed slightly so as to squeeze in England’s amazing victory in the cricket World Cup final. Sure enough he captured those jubilant scenes perfectly too.

Dickie Pelham has come a long way from winning the junior award at Thurrock Camera Club. Over 30 years later and he is still going strong. It’s quite clear to me that Dickie and The Sun is a marriage made in heaven and this book is a wonderful testament to that. Long may it continue.

A Life Behind the Lens by Richard Pelham. Published by Pitch Publishing, £29.95