Colin Grainger shared dressing rooms with Stanley Matthews and the Beatles, scored on his England debut against Brazil and counted film stars among his friends.

He rose from being a £1-a-week garage mechanic to become one of the finest footballers in England and a highly rated crooner who appeared on stage and television with top entertainment stars.

Grainger was dubbed “The Singing Winger” when he proved as adept at warbling into a microphone as he was tying right backs in knots.

Sheffield United winger Grainger marked his international debut with two goals in a 1956 England win over Brazil two years before the visitors became world champions for the first time.  In his next match he scored again against then world champions West Germany in Berlin. 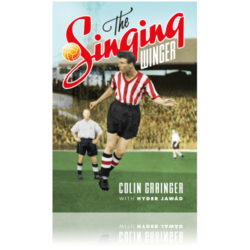 The world seemed to be at his feet. He perfected an Al Jolson act in his teens and his singing voice was discovered after Nat Lofthouse demanded he give the England team a song during a post-match party in Finland.

Good-looking Grainger sported a blond punk hairdo long before the term had been invented. He was popular with audiences and signed up to the prestigious HMV record label, released four singles and became firm friends with Joan and Jackie Collins, daughters of his voice coach.  As well as appearances in Stockport and Manchester with The Beatles he shared theatre billings with Adam Faith, Matt Monro and the Kaye Sisters and appeared in an ITV variety special with chart-topping pianist Winifred Atwell.

His football wage could not exceed the maximum £20 for playing twice a week but he earned £50 in 20 minutes for crooning four or five songs to theatre audiences. US band The Hilltoppers were so impressed they offered Grainger £5,000 to tour America as part of their show.

But Grainger remained loyal to Sheffield United, often catching three buses from his home to training at Bramall Lane, chatting to fans all the way.

The boy from a West Riding pit village of  800 inhabitants preferred to concentrate on a football career that brought him into contact with some of the biggest names in the game during a roller-coaster journey beginning as a 16-year-old at Wrexham  and ending nearly 30 years later in Yorkshire sunday football.

Grainger has anecdotes about them all and plenty more including Len Shackleton, Brian Clough, John Charles,  Matthews and the “Busby Babes” who were decimated so tragically in Munich in 1958. He even rejected the chance to join United’s rebuilt outfit out of respect for his good England pal Duncan Edwards who died in hospital soon after the crash. Laudably he says he didn’t want to profit from someone else’s misery.

At 86 Grainger is now one of England’s oldest surviving internationals with a fund of stories to tell. He writes of the cash-stuffed brown envelopes common as illegal payments to players when clubs were restricted to paying £20 a week and admits often selling titbits of information to journalists for “a few quid a time.”

He befriended Brian Glanville, who ghost wrote his column for the Sport Express and provided Grainger with a ticket for the 1953 Blackpool v Bolton “Matthews” FA Cup Final. Many other journalists are mentioned in the book superbly written by former Liverpool Echo, Times and Independent scribe Hyder Jawad. It’s a must for students of 1950s and 1960s football.

Many so-called life stories are thinner than Olive Oyl on a diet. This one is a real blockbuster worthy of Jackie Collins herself and the most absorbing football autobiography I have read this year.

The Singing Winger by Colin Grainger with Hyder Jawad is published by deCoubertin price £20.