SJA committee member and sports historian PHILIP BARKER reports from Sparta where the Greek leg of the Olympic flame torch relay was cancelled because of “unexpectedly large crowds”.

For weeks Olympic organisers have been fending questions about the potential impact of coronavirus and realised the symbolic importance of starting the relay.

The huge crowds evidently came as a surprise. Many turned out in Sparta to see actor Gerard Butler, who starred as Spartan King Leonidas in the 2006 film 300 which tells the story of the battle of Thermopylae in 480BC.

The crowds heard Butler intone his famous words “I am Sparta” as he lit a travelling cauldron beneath the statue of Leonidas.

That turned out to be the tipping point for organisers who had guaranteed the torch relay would be conducted in a safe manner.  Within the hour, the cancellation was announced.

Only civil war in 1948 had previously caused a detour of the route in Greece although many will remember the pro-Tibet protests over Beijing 2008’s international torch relay which caused constant alteration of the schedule in London.

The flame had been lit from the rays of the sun according to tradition in Ancient Olympia on Thursday and was to have been taken around Greece before an official handover to Tokyo in the Panathinaikos Stadium in Athens.

There was a wonderful moment at the start when Rio 2016 shooting champion Anna Korakaki carried the first torch in the ancient stadium. Nothing unusual about that except she was the first woman to do so in the 84 years since the relay was inaugurated in 1936. 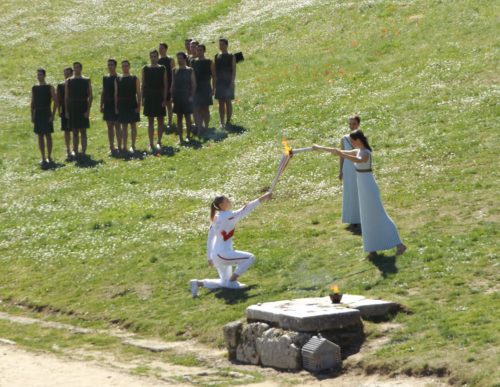 “She not only reflects sporting excellence but also our faith in gender equality and social inclusion,” said the multi-lingual Hellenic Olympic Committee president Spyros Capralos in English.

The Tokyo 2020 president’s special envoy spoke entirely in Japanese at the lighting ceremony. What was harder to fathom was that a translation of his words was not made available to the watching media, although the 100 invited guests of the Olympic family were given a copy.

That was not the fault of the HOC’s media team, who had faced a difficult time with uncertainty over which outlets were going to turn up.

So much of the programme itself was changed at the eleventh hour that the splendid official programme is now a catalogue of cancellation.

It has been instructive to see how media relations are handled. The IOC and Tokyo 2020 are in a very difficult position. The slightest wavering from the mantra “The Games will go on” and an inevitable media frenzy on the possibility of cancellation would result.