They say timing is everything and that is certainly true for a new book on the fortunes of Wycombe Wanderers. SJA President PATRICK COLLINS reviews Close Quarters: An Extraordinary Season On The Brink.

On a Wembley evening in July, Joe Jacobson of Wycombe Wanderers lined up a penalty kick. He took two stuttering steps, gave a little hop, and battered his shot straight down the middle. And Wycombe, unregarded Wycombe, were promoted to the Championship.

In normal times, the stadium would have resounded to the celebrations. On this occasion, the goal was greeted by a small bunch of cavorting players, a dancing group of directors and staff … and a gambler named Neil Harman.

Harman, once a leading light of the Daily Mail and The Times, had spent a season with Wycombe. He had been granted extraordinary access to everyone at the club, and had followed them match by match, month after month. The result would be a book which traced, in intricate detail, the course of that campaign. Yet the story demanded the bonus of a happy ending, and Jacobson’s goal answered the prayer. 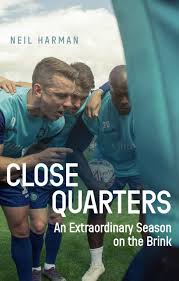 As Harman concedes, the book’s theme is not original. Hunter Davies blazed the trail almost half a century ago with his study of a Tottenham season, while Michael Calvin wrote an equally accomplished volume on Millwall in 2011.

But nothing, perhaps, has been as exhaustive as Close Quarters: An Extraordinary Season On The Brink. In the course of its 384 pages, Harman introduces us to pretty well every Wycombe player, to the manager, the assistant manager, the goalkeeping coach, the head of sports science, the head of medicine, the club secretary and the analyst. Not to mention the American owner, the owner’s wife and a whole cast of characters with livings to earn and stories to tell.

One player, Josh Parker, is given several paragraphs to describe the birth of his new daughter. Harman summarises the process: “The birth itself was much like a Wycombe performance; early lack of co-ordination, a lot of pushing, glimpses of precision teamwork, jostling for position, a bit messy near the end before a joyously successful delivery around the 90th minute”.

The most successful portraits are those of the manager, Gareth Ainsworth, and his assistant Richard Dobson. Ainsworth has been managing Wycombe since 2012. With his shoulder-length hair and black leather jacket, he still harbours rock star ambitions, yet he is a football man to the core. Wimbledon once paid Port Vale £2m for his talents, and we sense that he still yearns for the days when he could go out and make things happen, rather than teach and coax and bark at his young charges.

With his shoulder-length hair and black leather jacket, he still harbours rock star ambitions, yet he is a football man to the core

He clearly possesses the eloquence which seems to flow naturally from so many of his trade, and his dressing room speeches are among the best things in the book.

Dobson is thoughtful, reflective, the perfect foil to the man he calls “gaffer”. But he demands rigorous standards, his team talks are stimulating and imaginative. In short, they seem remarkably impressive men who could easily handle players at a higher and far more lucrative level.

But for the moment they manage Wycombe, a club on the brink of financial ruin as the season begins. Harman traces the influence of its eleventh-hour saviour, a Louisiana lawyer named Rob Couhig who came to the Buckinghamshire market town, fell in love with its football club, and helped set it on the road to Wembley and promotion.

It is an uplifting tale, and Harman recounts it with almost excessive attention to detail. No matter; Wycombe Wanderers was worth saving … and its story is well worth telling.

Close Quarters: An Extraordinary Season On The Brink, Pitch Publishing, £12.99