Vikki Orvice was an outstanding sports journalist. She was feisty, resourceful and utterly professional. She had a passion for the sports she covered, principally athletics and football, and she conveyed that passion through five Olympic Games, countless major championships, and all the Sheffield United games she could persuade The Sun to let her attend. 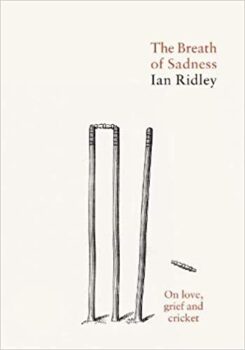 But Vikki was much more than that. She was a force of nature, somebody who could call Seb Coe, Paula Radcliffe or Jessica Ennis-Hill and know that her call would be accepted; somebody who could book the most coveted restaurants in a hundred foreign cities and provide them with sufficient guests to fill their largest table; somebody whose smile never dimmed, even on the darkest of days.

And Vikki knew many a dark day. In 2007, she contracted cancer. For all her private agony, she proceeded to treat it with a kind of amused contempt for the next twelve years.

Her husband, the eminent sports writer Ian Ridley, fell victim to the same disease two years after Vikki’s diagnosis. He therefore understood the fear and the pain, which made him marvel the more at the way in which she faced it.

He traces their respective journeys in “The Breath of Sadness …On love grief and cricket” (Floodlit Dreams Ltd £13.99). The cricket reference reflects his travels to county championship matches at Hove, the Isle of Wight, Leicester, Northampton, Lord’s, Scarborough and The Oval – all places which had held special meaning for himself and Vikki.

But the cricket is effectively no more than a device for tracking the course of an illness – often in harrowing, uncomfortable detail – and telling the story of the remarkable woman who fought it.

Vikki was, at various times, vice chair of the Football Writers’ Association, the first female chair of the British Athletics Writers Association and a committee member of the SJA. She also helped establish the Women in Football organisation, in between covering all those Olympic and Commonwealth Games and Athletics World Championships, and raising vast sums for the Royal Marsden Hospital.  And if she ever once felt sorry for herself, then certainly her colleagues were never aware of it.

She loved to tell the story of the night she sat next to Bobby Robson at an FWA dinner. Ian, helpfully, said to Robson: “Vikki has cancer as well.”

“Well, the primary was breast, but it could have been ovarian”, said Vikki.

“Them, pet, are the only two I’ve not had,” remarked Robson.

I can still hear her delivering the punch line, with a great yelp of laughter.

Vikki died on the morning of February 6th, 2019. She was widely mourned and is greatly missed. Her husband writes of their love, their sufferings and their joys. He also writes, with affecting honesty of the depths of his grief. It is a brave book, but that is entirely appropriate. For Vikki Orvice was not only a terrific journalist, she was a wonderfully brave woman.