The very best columnists are universally fine writers, opinionated and provocative. Their crust is not earned by getting splinters in their backsides by sitting on fences and reflecting all sides of an argument.

They need to be decisive and passionate about the opinions they present. Michael Calvin’s latest work does not disappoint in confirming his status as one of the UK’s best sports writers of modern times.

Everyone will have their own favourite sports journalist and over the years I’ve had the honour and privilege of working alongside some of the very best including Calvin and his nominated hero, the late Ian Wooldridge. I must also state an interest in this work. Michael and I have been colleagues at two newspapers and have been contemporaries, friends and, at times, professional rivals throughout our careers in journalism.

Calvin has delivered a series of award-winning books in recent years and he admits that within this tome of 318 pages he revisits some of the places, people and plots he has dealt with in the past. Those return trips do not weaken his engaging narrative. They add depth as he pulls together a variety of threads to create an engaging patchwork of powerful ideas, brutal criticism and genuine acclaim for the heroes of Calvin’s life. 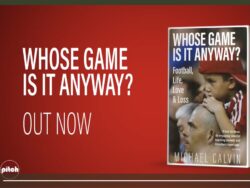 Indeed, the inspirations for this book lie within Calvin’s family – especially his father-in-law, Olly Goss. In a professional world where we are often asked to expose and debate the misfortune of others, while choosing to keep our own backgrounds emphatically private, Calvin bravely acknowledges the challenges of his own childhood, perhaps none more compelling than his fight to overcome tuberculosis as a 17 year-old.

Covering elite sport as a British journalist over the past forty years has been akin to being a student of political and economic history. You would think that governments would be smarter about the way they engage with sport in the shape of fans, players and journalists – but they don’t. It was a callow Calvin who was invited to meet Prime Minister Margaret Thatcher at Downing Street in the wake of the Heysel Stadium in 1985.

Mrs Thatcher, and her advisers, had a ready-made view of how they wanted to punish the people’s game. It’s a wiser, senior journalist who sat at home during the coronavirus pandemic to witness Marcus Rashford force Prime Minister Boris Johnson into two spectacular U-turns over his free school meals policies. Make the connections between Heysel, Valley Parade, Hillsborough and you realise in recent decades sports journalists have required bravery to expose gross negligence on behalf of stadium owners while also pointing a finger of blame at the authorities complicit in the disasters.

As Calvin writes: “Sports writers are used to jibes that about working in the toy department, but the ubiquity of football, in particular, offers the opportunity to help provide a first draft of history. The pace of social and political change over the past 40 years has been profound and though this may seem obtuse, sport has the power to influence the most repressive regimes.”

Sir Michael Parkinson, acclaimed broadcaster and a fine sports writer in his own right, once spoke publicly on a similar theme. As President of the Sports Journalists’ Association, Parkinson said: “Those people in newspaper offices who talk dismissively about sport being the toy department have gradually realised that many of the finest writers on their staff just happen to be primarily employed covering sport.”

Calvin, and a number of others I could name here, undoubtedly fit that description. Perceptively, Calvin addresses the threat of a breakaway by the supposed Big Six of English football and attacks their motivation of greed. 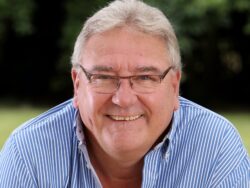 He explains: “Sometimes it takes a stranger to point out what is in front of our noses. I recalled the words of (Leeds manager) Marcelo Bielsa, a singular man and economic migrant to the Premier League: ‘If anything describes English football, it is League One and League Two. If there is anything to distinguish English football, it is the spirit  you compete with. The spirit is no better represented than in those lower categories. It’s the nucleus, the heart, the essence of football in this country.’”

On the subject of Hillsborough, Calvin (pictured left) describes 1989 as “Year Zero in terms of breaking football’s cycle of decline.” But he can see the threads of disdain among our ruling class still evident in the current government that were painfully evident back in the Eighties.

He explains: “Some things have remained constant. Fans are mistrusted by Thatcher’s children, who abandoned the pretence of evenhandedness when it came to readmitting spectators to sporting and cultural events after the official lockdown in 2020. In their class-conscious time warp, football fans remained unworthy, malevolent Neanderthals. The consequences for clubs were catastrophic.”

For most of us it was our parents – one or both – who took us to our first football match, it is the parents who have been left bereft by the aftermath of the tragedies that have scarred football. None more so than in the wake of Hillsborough.  His retrospective interview with Margaret Aspinall, one of the most inspirational figures to emerge in the post-Hillsborough years, a mother who lost her 18 year-old son James in the disaster, is particularly moving.

Calvin salutes Margaret’s heart-wrenching candour when she explains: “No matter how old you are, when you are dying or you feel you are going to die, the person you ask for is your mum. That’s what makes it more heart-wrenching, when you weren’t with them, and you think, what was he thinking? Was he saying: ‘Where are you, Mum? Help me Mum. You were there when I took my first breath, where are you for my last?’”

Calvin and I agree on the most toxic football match we ever covered. It was Northern Ireland against the Republic of Ireland in a World Cup qualifier in Belfast. Sectarian troubles still simmered in 1993. Jack Charlton’s Republic team grabbed a 1-1 draw that sealed their passage to the finals in the United States. We were both happy to seal our passage out of Belfast that night.

Opinions on Diego Maradona are rarely based on cool-headed analysis. Calvin writes; “He (Maradona) exuded the joy of a boy of a boy whose Groundhog Day is Christmas Day. When he left the pitch, playfully kicking rainwater after hugging the goalkeeper, he crossed himself. We didn’t think to pray for him. Heroes might be sanctified by memory, but they are mortal.”

As he recalls, Calvin and I dined one evening in London with England stalwart Terry Butcher, who was on the pitch in Mexico when Maradona slalomed his way past Terry and his colleagues to score perhaps the greatest ever World Cup goal. Calvin describes it as the best goal he has ever seen live. That came minutes after his Hand of God act of cheating.

Calvin salutes the personal integrity of Graham Taylor, the manager who transformed Watford, the club Mike supported as a boy. He attacks the culture of baiting England managers that started with Bobby Robson before a ball had been kicked at the 1990 World Cup finals and saw Calvin’s hero branded “Turnip Taylor” in a memorably abusive Sun back page headline.

In the chapter when he reviews the 2010 World Cup in South Africa he superbly dissects the opportunism of the “FIFA kleptocrats (who) loved the symbolism of the founding fathers (of the post-apartheid South Africa).” Typically Sepp Blatter and his chums within the corrupt FIFA hierarchy “preened during their photoshoots with them on Robben Island.”

It is left to one of South Africa’s founding fathers Tony Suze, Prisoner 501/63 on Robben Island, to “fashion their epitaph.” His words are also the perfect sign-off to Mike’s reflections of his own career. Suze said: “Unless you sing your own song, the hymn sheet will be buried away. Your history will disappear, no matter how noble it is.”

Whose game is it anyway? Football, life, love and loss by Michael Calvin (Pitch Publishing)