The latest book from SJA member Michael Calvin, The Nowhere Men, has been voted as the Sports Book of the Year. 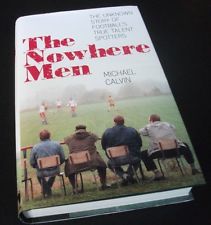 Calvin, the chief sportswriter for the Independent on Sunday, has in the past been named as the SJA’s Sportswriter of the Year for his despatches as a crew member in a round the world yacht race, and has twice been named Sports Reporter of the Year. His previous book, Family: Life Death and Football, was shortlisted in the 2011 Sports Book Awards.

“Being named as Sports Book of the Year is a huge honour, and I hope its success is seen as collective rather than personal,” Calvin said.

“The Nowhere Men would not have been written without the trust of a group of men who deserve to be hailed as football’s hidden heroes .”

The Nowhere Men: The Unknown Story of Football’s True Talent Spotters, to give the book its full title, had won the football book category at the sports book awards.

The various category winners were then put up for a public vote, with Calvin’s work up against books including former tennis champion Jimmy Connors’ autobiography, Brough Scott’s biography of Sir Henry Cecil (the horse racing book of the year), and Simon Halliday’s rugby book of the year, City Centre.