Did you hear about the football manager who underwent electric shock treatment to treat depression, or the one who has moved home 33 times? JANINE SELF has after reading Michael Calvin’s latest book

The football manager’s press conference. Pretty much a platitude-driven, media-officer-briefed superficial 15 minutes once a week with a bloke who is already mentally on the training ground. 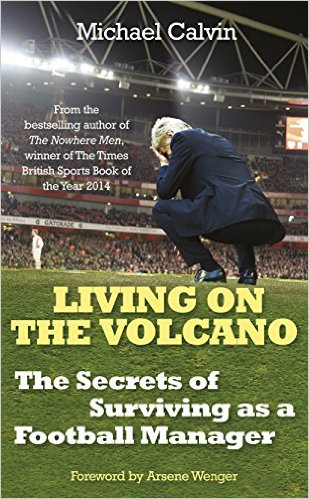 All those alpha males and not a soft underbelly in sight.

So, how on earth did Michael Calvin persuade a whole host of that rare species to unburden themselves for his book, Living on the Volcano-  The Secrets of Surviving as a Football Manager?

However he achieved it, the result is a remarkable insight into what makes these men tick, or in some cases, tic. Stress, insomnia, paranoia, depression with a dash of ego, a dollop of insecurity and there you have it … one volatile cocktail.

Calvin is an exquisite writer but he is also a “proper” journalist. If a manager wants to keep talking, thus revealing far more than he perhaps intended, Calvin sits back and allow the dictaphone to take the strain then lets the quotes run.

Arsene Wenger’s foreword sets the bar high, while the first chapter is a dramatic page-turner as one manager talks about his electric shock treatment to cure depression.

Brendan Rodgers, Alan Pardew, Steve McClaren, Paul Tidsdale, Karl Robinson, Eddie Howe… there must be close to 30 managers quoted in a book which is even more entertaining than Calvin’s two previous lauded publications – Family and The Nowhere Men.

There are recurring themes but there are also wonderful little snippets. Calvin went to see Robinson at MK Dons and watched Dele Alli spit out a piece of chewing gum, bounce it on his knee, from one foot to the other and back into his mouth. The Dele Alli who went to Tottenham for £5 million shortly afterwards.

One of the more disturbing stories was how Robinson, on a day out with his little daughter, was berated by an angry fan for laughing when the team had just lost.

Steve McClaren likes to shake hands with players and maintain eye contact, Chris Hughton signed up for a corporate management course while out of work, long-serving Exeter boss Tisdale has to bring-on and sell-on at least one player a year, and Ian Holloway has moved house 33 times…

And so the revelations continue.