Carlisle United has found itself caught up in a bizarre social media row involving club director Steven Pattison in which critical remarks were made about, among others, the award-winning Cumbrian Newspapers journalist Jon Colman.

A screengrab of a text message conversation was posted from the United director of football’s Twitter account this week.

The image – which was deleted soon after it – showed messages from “Keith” which appeared to make disparaging comments about Colman, the multiple winner of the SJA’s Regional Sportswriter of the Year Award, as well as Pattison’s fellow director Dick Young, and Andrew Lapping, the man whose investment proposals were recently thrown out by the club.

The Cumberland News asked both Pattison and the club to elaborate on the matter and to confirm that the “Keith” in question is not United’s manager, Keith Curle.

After removing the image, Pattison, one of United’s joint owners, claimed he had not posted the screengrab himself. He tweeted: “When that Tweet was sent I was doing the banking and my phone was at my desk on charge. Should learn to lock phone and trust nobody.”

He also insisted the conversation in the screengrab was several months old, conducted when Pattison was on holiday, and he had “prob[ably] had a few pints” when the image was saved to his phone. 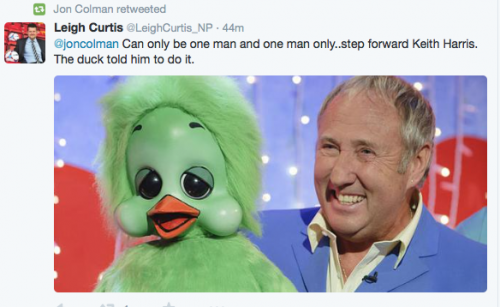 He did not respond to questions about the identity of “Keith”.

Sources at the League Two club recently insisted that another Keith, the former Stockport and Gretna managing director Keith Agar, had no link to United’s ongoing pursuit of investment from a mystery “billionaire”.

Colman later retweeted a message (pictured above) from Leigh Curtis, the Notts County writer for the Nottingham Post: “Can only be one man and one man only … step forward Keith Harris. The duck told him to do it.”