Learie Constantine was a big man with a laugh to match. His guffaw reverberated around a room while his shoulders and chest heaved in never-to-be-forgotten synchronicity.

The story of how this genial grandson of a Trinidad slave battled prejudice to land fame and fortune is a long and complex one, ably summarised by journalist Brian Scovell in a new book. 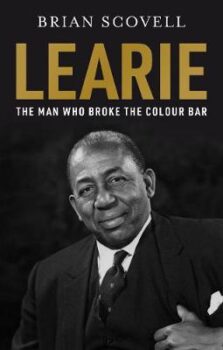 Constantine blossomed into one of the best-known names in the world as he rose from humble beginnings to rub shoulders with cabinet ministers and royalty. He even became a subject on the “This is your Life” television programme.

Cricket launched Constantine on an improbable path towards becoming a central figure in race relations, the first High Commissioner of Trinidad, the first Afro-Caribbean to become a peer and a BBC governor.

At a time when UK post-war race relations were often typified by notices in boarding house windows reading: “No Irish, no dogs, no blacks” Constantine won a 1944 High Court action after his family were ordered out of London’s Imperial Hotel because American soldiers objected. It led eventually to the Race Relations Act.

Remarkably, Constantine’s contribution to first class cricket seems modest. He never appeared for a county yet made a significant impact with bat and ball against them during two West Indies tours here. He would have been an ideal captain but the all-white West Indian cricket board preferred a white leader.

In 18 Tests he achieved a batting average of 19.24 but impressed many opponents with his mastery of the short, explosive, match-turning innings. Constantine surprised batsmen with bouncers and was also among the world’s greatest fielders, his 28 Test catches often including a party trick where he seemed to have run in too far for a lofted shot but then leaned slightly forward to catch the ball behind his back. Don Bradman called him “one of the most outstanding fielders of his time.”

In the 1930s Constantine became Britain’s highest paid cricketer after accepting a multi-layered offer from Nelson to play in the Lancashire League. Nelson gambled on a star name to wipe out £3,000 debts. They offered Constantine a £500 per year, three-year contract plus up to £100 a season bonus for reaching 50s and taking five wickets.

Match-day collections boosted the total. No county cricketer earned that sort of money and Constantine accepted a generous offer which meant he played only on Saturdays rather than slogging around England six days a week on the county circuit.

That gave him time to pursue legal studies with the aim of becoming a barrister. The biggest problem for Nelson was finding suitable accommodation for Constantine and wife Norma in a heavily prejudiced Britain. Eventually rooms were found with a sympathetic landlady.

Constantine’s mercurial performances soon transformed Nelson into championship contenders, extra spectators poured in and he was quickly accepted by townsfolk.

One of the most illuminating passages of Scovell’s book describes how he ghost wrote a Constantine column for the now defunct Daily Sketch.

Young journalists will be shocked to note the labour intensive process of getting Constantine’s verdict into print. Around tea time at Tests, Constantine gave Scovell his thoughts on the day’s play.

Scovell would knock them into shape, type up 500 words and pass the manuscript to a telephonist at the ground who would then read it to a copytaker back at the Sketch office.

The copy would then pass through the hands of a sub-editor, lineotype operator, proof-reader and stonehand to be ready for printing. That’s seven people from various different unions required to get Constantine’s words onto printed paper. A nice little earner indeed.

Fleet Street legend Scovell has produced one of the best of his 29 sports biographies.

Learie, the man who broke the colour bar, By Brian Scovell is published by The Book Guild Ltd, price £9.99.